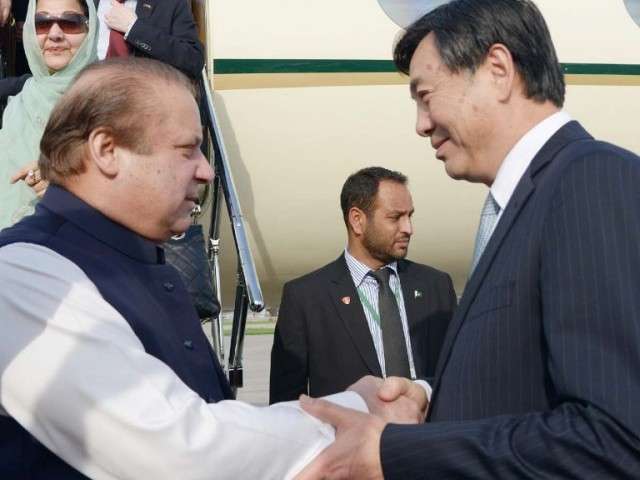 BEIJING: Prime Minister Nawaz Sharif started his first foreign visit after being elected in May. With China the first port of call, on Thursday he looked to secure infrastructure projects to tackle a chronic energy crisis and economic malaise back home.

Since his victory at the polls, Nawaz has sought to strengthen economic ties with close ally Beijing as he bids to tackle weak growth, inflation and power cuts of up to 20 hours a day.

Nawaz also met President Xi Jinping on Thursday and will meet Premier Li Keqiang on Friday, according to a schedule provided by officials.

Prime Minister Nawaz told Jinping that his country is facing an economic crisis in tandem with internal and regional security issues and expressed hope that China would stand by Pakistan in difficult times.

“We are proud that you have chosen China for your first overseas visit,” the Chinese President said, adding that he hoped tangible outcomes will emerge as a result of the visit.

Over the weekend the Prime Minister will attend a China-Pakistan Energy Forum in Shanghai and meet with a power company in the southern city of Guangzhou, before flying home on Monday.

Pakistan, where Nawaz won praise for pulling off high-impact infrastructure projects such as a motorway during his two previous tenures in office, has opened its arms to Chinese investment.

Premier Li – the first foreign leader to visit Pakistan after Nawaz’s election – said in Islamabad that Beijing was ready to speed up work to upgrade the Karakoram Highway as part of a proposed economic corridor between the two countries.

Earlier this year, China took control of Gwadar port, giving it access to the Arabian Sea and Strait of Hormuz, a gateway for a third of the world’s traded oil.

China-Pakistan trade last year reached $12 billion and is targeted to rise to $15 billion in the next two to three years.

The threat of militancy is also likely to figure during Nawaz’s discussions.

Nawaz on Thursday morning tried the Beijing subway system and inquired about its operation and features.

The Prime Minister before travelling in the metro train, went to the operation room, where he was briefed about the subway system of the capital city.

He was also briefed about the cost of the project and the subsidy the government is providing to the commuters.

The Prime Minister was informed that on average 40,000 people ride in the subway per hour.

Talking to press officials, he said that his government is committed to providing low-cost travelling facilities to the masses.

“I am impressed with the underground railway system,” he said, adding that it would be great to have in Pakistan.

Nawaz’s party, the Pakistan Muslim League-Nawaz (PML-N) had earlier in the year started a metro bus system in Lahore during the previous government in Pakistan. As part of its election campaign, Nawaz had promised a metro bus system for other urban centres and a metro rail system.