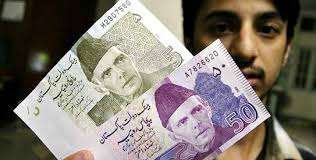 The State Bank reported on Monday that the current account deficit rose by $1.952bn, compared to $3.920bn in the same period last year.

The new government is facing the same situation as witnessed in 2008 when the then government took charge and had to rush for IMF bailout package to avoid default on foreign payments.

Currently the biggest slice from poor foreign exchange reserves is being paid to the IMF.

However, the State Bank believes that the country is far from default and its reserves are above the red-line of international standard.

“Despite decline in foreign reserves, the measures of foreign reserve adequacy remain above international standards,” said the SBP in a recently issued report.

It said sufficient import cover is available. According to international standards, a country’s liquid foreign exchange reserves should be sufficient to cover three months of imports.

Pakistan’s liquid forex reserves seem adequate according to this criterion.

In fact, even after adjustments for IMF repayments for the next quarter (4th quarter-FY-13) Pakistan would have adequate import cover, said the State Bank.

The bank further said that Pakistan’s liquid FX reserves are 10 times the stock of short-term debt (both public and private).

According to international standards, a country’s reserves should be at least equal to the volume of short term debt.

However, the State Bank traced the cause of increasing current account deficit in the fall of remittances during the third quarter.

It said for the first time after 2005, the third quarter of 2013 noted a decline in remittances.

The State Bank also noted that for the last 13 months banks operating overseas and facilitating remittances were not paid the promised money by the government which slowed the process of remittances.

To encourage overseas Pakistanis to remit through official channels, the Government of Pakistan partially reimburses the TT (telegraphic transfer) cost that banks have to bear in transferring money to Pakistan.

For every inward remittance of over $100, the government pays Saudi Riyal 25 to the bank, which partially covers their related expenses.

“For last 13 months, the government was unable to reimburse banks operating overseas.”

The July-May deficit is still half of the deficit witnessed by the country during the same period of last year.

The July-May FDI rose to $1.3bn compared to $764 million during the same period last year.

It is believed that the new government is able to attract more FDI compared to the previous economic managers but some experts have shown their disappointment over the absence of any long term plan to deal with permanent inflicting problem of deficit.