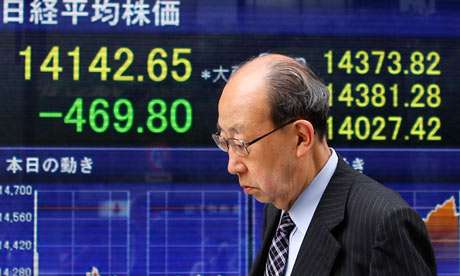 Bloomberg – Asian stocks rose, with the regional benchmark index heading for a fifth day of gains, after U.S. manufacturing expanded faster than forecast.

The MSCI Asia Pacific Index rose 0.6 percent to 131.59 as of 12:50 p.m. in Tokyo, with about three shares rising for every two that fell. The gauge last week posted its first quarterly slump in a year amid signs of an economic slowdown in China and after Federal Reserve Chairman Ben S. Bernanke said policy makers may start dialing down stimulus if the U.S. economy shows sustained improvement.

“Economic fundamentals in most areas have been improving,” said Angus Gluskie, managing director at White Funds Management in Sydney, who helps manage about $450 million. “Markets have some potential to pick up from here. There’s still a degree of nervousness out there as we’re at the juncture when the Federal Reserve is signaling it may reduce stimulus measures. There’s also a clear change of policy direction in China.”

The MSCI Asia Pacific Index retreated 9.4 percent through yesterday from the closing level on May 20, which was the highest since June 2008. Shares on the gauge traded at 12.8 times estimated earnings as of yesterday, compared with 14.7 for the Standard & Poor’s 500 Index and 12.8 times for the Stoxx Europe 600 Index, according to data compiled by Bloomberg.

Futures on the Standard & Poor’s 500 Index added 0.1 percent today after the index rose 0.5 percent in New York yesterday. The Institute for Supply Management’s manufacturing index increased to 50.9 in June from 49 a month earlier, the Tempe, Arizona-based group said yesterday. The median forecast of 85 economists surveyed by Bloomberg called for the measure to rise to 50.5. A reading above 50 signals expansion.

Construction spending in the U.S. climbed in May, led by the strongest expenditures on residential projects in more than four years.

Exporters advanced. Li & Fung climbed 3.8 percent to HK$11.06 in Hong Kong. James Hardie Industries SE, a building-materials supplier that counts the U.S. as its biggest market, gained 1.7 percent to A$9.45 in Sydney. Honda Motor Co. (7267), which gets 46 percent of its car sales from North America, added 2 percent to 3,775 yen in Tokyo.

PetroChina Co., the country’s biggest natural gas producer and supplier, surged 5.8 percent to HK$8.73, heading for its biggest advance since January 2010, after Beijing announced it will raise prices for non-residential users.

Tokyo Electric Power Co. (9501), the utility at the center of the 2011 nuclear disaster, jumped 10 percent to 576 yen on a report it will apply to restart reactors at one of its plants.

Among stocks that declined, SK Hynix (000660) slumped 7.3 percent to 29,250 won in Seoul. CLSA cut the stock’s rating to sell from outperform, saying earnings may peak this quarter.