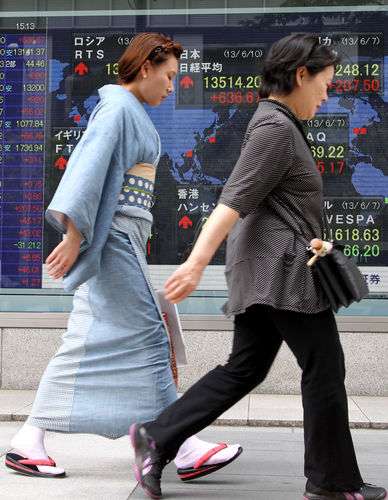 The MSCI Asia Pacific Index sank 0.5 percent to 142.22 as of 10:49 a.m. in Tokyo, extending this week’s fall to 0.9 percent. The gauge climbed to a five-month high on Oct. 22 amid speculation the Federal Reserve would delay tapering stimulus, pushing its earnings multiple to 13.8 times estimated profit, according to data compiled by Bloomberg.

“The earnings numbers are not fantastic,” Evan Lucas, Melbourne-based market strategist at IG Ltd. said by phone. “Many of the export-driven Japanese companies like Canon had the weakening yen supporting them earlier in the year but that is now stagnating. People are starting to reassess those shares that have had that support.”

Of 73 companies in the MSCI Asia Pacific Index that have reported quarterly results this earnings season and for which Bloomberg compiles estimates, 60 percent posted profit that missed expectations.

Fed policy makers are scheduled to meet Oct. 29-30, when they will evaluate the strength of the recovery with a less complete set of figures than usual due to the 16-day partial government shutdown that caused the suspension of reports and collection of data.

Japanese consumer prices climbed in September from a year earlier, a fourth monthly gain. The Topix surged 40 percent this year through yesterday, the largest rally among 24 developed equity markets tracked by Bloomberg.