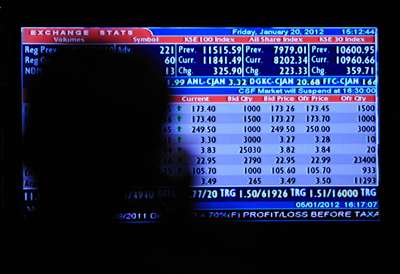 Bearish sentiment continued a panic shivering with institutions following retailers over uncertainty on such high levels . Foreign and local institutions recorded an outflow of – compared to last weeks numbers of – that broke the index level of 22000.

The coming monetary policy ,decent formation of the finance bill ,government negotiation on IPP rates and major documented steps on clearing out circular debt are the news that’s holding the market on the edge. Record petrol sales gave a positive momentum in the Oil management companies to bear the pressure to some point in the last session that recovered some points in negative . Said Mujtaba barakzai (Manager Equities at JS Global)

Continuous negative flows from foreign sides triggered the selling pressure in the bourse as the market closed — points  The major chunk of points in red were contributed by OGDC with 38 points and MCB 102 points .Selling was also witnessed in DGKC (-2%) and PTC (-1%) that are revolving on the positive news of the cement prices going up by 35 rupees and ICH phenomenal rates being charged on 8 cents compared to last year’s 2 cents  . Profit taking was witnessed in the cement sector as the volume leaders were mostly cement companies. We expect the market to be heading on a positive rift to little rebound on technical graphs and volumetric charts.

Profit taking was also seen in other oil stocks, although selective buying was witnessed in cement stocks after the price of cement bags increased, said dealer Samar Iqbal at Topline Securities.