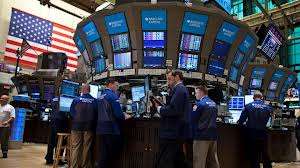 “People are still digesting the news from the Fed, making mental adjustments for different levels of interest rates and what those might imply for securities’ prices over the next several quarters,” John Carey, a fund manager at Boston-based Pioneer Investment Management Inc., said by telephone. His firm oversees about $208 billion. “I’m encouraged the market has stabilized a little here.”

The S&P 500 tumbled 5.8 percent since a record on May 21 through yesterday, the day before Federal Reserve Chairman Ben S. Bernanke said the central bank may start paring stimulus efforts as soon as September if the economy improves in line with its forecasts. The quantitative-easing measures have helped fuel a rally in stocks worldwide, with the benchmark U.S. index surging as much as 147 percent from its March 2009 low.

The gauge spent 149 days through June 21 without incurring a drop of 5 percent or more from a peak, the longest since a 173-day stretch ended Feb. 20, 2007, about eight months before the financial crisis sent the market plunging 57 percent. While the S&P 500 is up 1.2 percent for the quarter, it is down 2.6 percent in June, on course to snap a streak of seven monthly advances, the longest run since September 2009.

“QE lifted all boats,” Witold Bahrke, who helps oversee $55 billion as a senior strategist at PFA Pension A/S in Copenhagen, wrote in an e-mail. “Equally, its removal will shake all markets. The recent comments from central-bank officials show that they are a bit scared about the consequences of their own words and do not want to see a cold-turkey reaction in markets in the context of a still-fragile world economy.”

China’s central bank will keep money-market rates at a reasonable level and seasonal forces that have driven them up will fade, Ling Tao, deputy director of the PBOC’s Shanghai branch, said at a briefing in Shanghai today. The overnight repurchase rate dropped 47 basis points to 6 percent, according to a daily fixing compiled by the National Interbank Funding Center. It reached a record 12.85 percent on June 20.

Trading of S&P 500 companies was 6.8 percent higher than the 30-day average at this time of day. About 28.8 billion shares have changed hands on U.S. exchanges in the past three trading days, the most since August 2011, according to data compiled by Bloomberg.

The Chicago Board Options Exchange Volatility Index, the measure of options on the S&P 500 known as the VIX, fell 9.3 percent to 18.24. The gauge surged 6.4 percent to 20.11 yesterday, and has climbed 62 percent since hitting a six-year low in March.

PulteGroup rallied 3 percent to $18.86. Ten out of 11 members of S&P Supercomposite Homebuilding Index advanced. The homebuilder index recovered after falling 19.6 percent from a May 14 peak through yesterday, close to the 20 percent threshold considered to be a bear market.

Carnival Corp. rallied 4.7 percent to $34.79. The cruise operator that had a series of mishaps at sea this year reported fiscal second-quarter profit that topped analysts’ estimates. The company also said Micky Arison will step down as chief executive officer after 34 years as it splits the CEO and chairman roles.

Barnes & Noble Inc. tumbled 19 percent, the largest intraday decline since January 2012, to $15.32. The U.S. bookstore chain that’s considering breaking itself up posted a loss that was twice as wide as analysts estimated and said it would stop making tablets as the digital unit’s sales plummet.

While investors in U.S. stocks have suffered losses amid signs the Fed will pare stimulus measures, the declines look small when compared with the rout elsewhere in the world. U.S. shares have dropped at a slower pace than those in Asia and Europe since May 22, when Bernanke signaled that the central bank could taper quantitative easing as the economy improves.

The S&P 500’s 4.6 percent drop from its May high through the end of last week compares with 9.7 percent for the Stoxx Europe 600 Index and 12 percent for the MSCI Asia Pacific Index.

“The U.S. is regarded as a safe haven and as an economy that’s just beginning to get up and running, which has produced this relative outperformance in stocks in the short term,” said Nick Skiming, who helps manage about $2 billion at Ashburton Ltd. in Jersey, the Channel Islands.