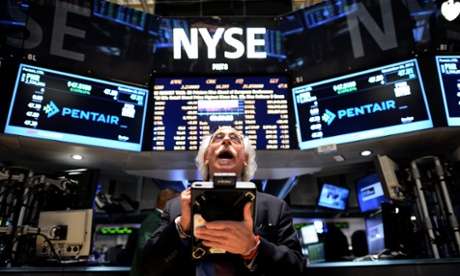 A broad based sell off sparked by the Federal Reserve’s assertion that tapering may begin soon continued on Monday, with U.S. stocks opening deep in negative territory and interest rates rising dramatically.  Investors attempted a turnaround in the afternoon, with stocks bouncing off their lows, but the Dow still closed with triple digit losses.  While risk assets underperformed across the globe, China took some of the worst of it, as a liquidity crunch has wounded the financial sector, pushing the Shanghai Composite down more than 5% to kick off the week.

The carnage started in Asia where China, the world’s second largest economy, is suffering from a self-inflicted wound.  With the government trying to clamp down on a massive shadow banking system, short-term interest rates spiked over the past few trading sessions, putting funding pressure on banks.  On Monday, short-term borrowing rates fell but remained elevated, as the People’s Bank of China noted there is ample liquidity in the system and asked major banks to help stabilize the system.  The Shanghai Composite fell 5.3%.

A general rout in risk assets began last week when Fed Chairman Ben Bernanke indicated the FOMC could begin to taper its asset purchases, or quantitative easing, later this year.  The Fed intended to make this seem like a slowdown in the expansion of monetary policy, yet markets, addicted and supported by QE, took it as policy tightening.  Widespread selling of several asset classes, from commodities to equities to bonds, ensued.

The yield on benchmark 10-year U.S. Treasuries began its upward climb and hasn’t stopped since, hitting 2.657% at one point in early trading, before coming back to 2.55%.  At the same time, the U.S. dollar has been strengthening, gaining against major currencies like the euro and the Japanese yen, with the dollar index up 0.1% to 82.40.  Gold fell once again, losing 0.7% to $1,282.80 an ounce, as did crude oil.  The VIX, the market’s favorite measure of volatility, rose past 20 in early trading, a key psychological level, but had fallen back to 19.86.

Among major stocks, financials were helping drag the market lower.  Bank of America BAC -3.07%, one of the most active stocks by volume in the session, closed down 3.1% while Citigroup C -3.05% fell by the same amount.  Pfizer PFE -2.64% was another of the day’s most active stocks, down 2.6%, as the firm sold out of its position in animal health company Zoetis.  Billionaire battleground stock Dell was also in the day’s headlines, as a special board committee blasted Carl Icahn’s proposed bid for the company.