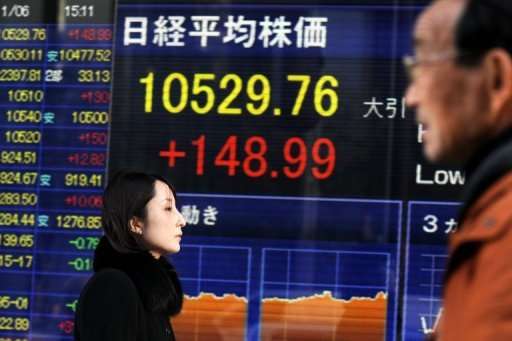 The dollar plumbed 10-week lows against the yen on uncertainty over the Federal Reserve’s policy outlook and on disappointment over the Bank of Japan took no action to calm the domestic bond market – which continued to prompt investors to unwind short yen positions.

The position adjustments were exacerbated as some hedge funds sold assets for cash ahead of their half-year book closing, some traders said.

The dollar index .DXY, measured against a basket of six major currencies, was down 0.27 percent to its lowest since February 20.

Against the yen, the dollar was down 1.3 percent at 94.82 after earlier touching a 10-week low of 94.30, wiping all gains made on April 4 when the BOJ unveiled a bold bond-buying scheme aimed at reflating the economy, encouraging speculators to bet on a weakening yen. The dollar is now down more than 8 percent from a 4-1/2-year peak of 103.74 yen scaled last month.

Japan’s Nikkei stock average .N225 dived 6 percent, extending a selloff that began on May 23 on worries over slowing growth in China and the Fed’s policy outlook. The Nikkei scaled a 5-1/2-year high last month. .T

“Investors are becoming risk averse on global assets,” said Yasuo Sakuma, portfolio manager at Bayview Asset Management, adding that such weak sentiment may last as long as there are concerns about the Fed scaling back its stimulus measures.

MSCI’s broadest index of Asia-Pacific shares outside Japan .MIAPJ0000PUS tumbled 1.9 percent to its lowest since November for its biggest daily drop in three weeks when global financial markets were rattled by comments from Fed Chairman Ben Bernanke suggesting the U.S. central bank could tone down its bond-buying stimulus plan if the economy continued to improve.

Around the same time the Bank of Japan also held off from taking fresh measures after a bold reflationary scheme on April 4, a stance repeated at its meeting last week when the bank decided against fresh steps to quell heightened volatility in domestic bonds that has threatened to undercut its ultra-easy monetary policy.

Australian shares .AXJO fell 1 percent to a fresh 5-1/2-month low while South Korean shares .KS11 slipped 1.1 percent. Chinese markets reopened with a slump on weak May economic data, after being shut from Monday to Wednesday, while Hong Kong also resumed trading on Wednesday after a holiday.

Global stocks, commodities, bonds and currencies have been roiled in recent weeks on concerns the Fed could scale back its massive stimulus measures in coming months.

“Market volatility is expected to stay elevated until the Fed’s policy meeting next week, at which we may see with more clarity into the tapering issue,” said Yuji Saito, director of foreign exchange at Credit Agricole in Tokyo. “If volatility in stocks subsides, currencies will return to trading on fundamentals.”

The Fed’s next policy meeting will be held next week, on June 18-19.

“The market is extremely sensitive with foreign exchange levels. If the dollar nears 95 yen again, there will likely be a sharp sell-off,” said Kenichi Hirano, a strategist at Tachibana Securities.

The Bank of Korea held interest rates steady on Thursday, possibly matching the analysts’ consensus view that the cut in May was the last one for the year because South Korea is on a track to recovery.