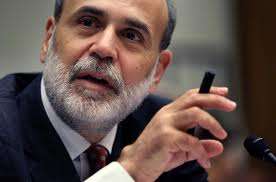 By Jennifer Ablan and David Randall

It doesn’t matter whether it’s a “govvies” guy focused on U.S. Treasury debt or a junk bond junkie devoted to high-yield corporate bonds. The losses inflicted across all fixed-income assets since Bernanke signaled on May 22 that the Fed could soon dial back its $85 billion a month in bond purchases have been deep: $406 billion of cumulative losses, according to Bank of America/Merrill Lynch Fixed Income Indexes data.

“It has been a tough month after a rough May for a lot of investors, but mostly for the bond crowd,” said John Brynjolfsson, chief investment officer of hedge fund Armored Wolf.

The downward spiral accelerated on Wednesday when Bernanke said the Fed now views the U.S. economy as strong enough to consider reducing bond purchases by year end and ending them entirely by the middle of next year.

The 10-year Treasury note yield  US10YT=RR climbed 46 basis points during May and has risen another 28 basis points so far in June. The yield hit 2.47 percent in overnight trading Thursday, its highest level since August 2011. Yields move inversely to the price of bonds.

“The big question is: Is this a short-term or a whole re-pricing?” said Marc Lasry, co-founder of the $12 billion distressed debt firm Avenue Capital. “Right now it is too early to tell. We need to wait a little while, about two weeks” to get a better picture of whether the sell-off is a more permanent correction.

Funds with large exposures to interest rates and emerging markets have been hit the hardest.

The $265 million Pimco Extended Duration Fund  PEDIX.O, for instance, has fallen 12.3 percent since the end of April, according to Lipper data. The $495 million TCW Emerging Markets Local Currency Fund  TGWIX.O has dropped 9.3 percent over the same time, while the $3.2 billion Vanguard Long-term Treasury Fund  VUSTX.O has lost 8 percent.

By comparison, the Barclays Aggregate Index, a measure of the total U.S. bond market, lost approximately 2.58 percent over the same time frame.

Bond managers have been well aware of the risks. Bill Gross, who is often referred to as the “bond king” for his role as manager of the Pimco Total Return Fund  PTTRX.O, the world’s largest bond fund, set the Wall Street Twittersphere alight several weeks ago with this 62-character missive: “The secular 30-yr bull market in bonds likely ended 4/29/2013.”

The “price peak refers not to Treasuries but to all bonds, including a weighted amount of high-yield debt. Thus the 4/29 date will not exactly correspond to a bottom in 10-year Treasury yields, for instance,” Gross said in an email response to Reuters. The Pimco Total Return fund is down 3.25 percent since the end of April.

In early May, Bernanke began what appeared to be a campaign of jaw-boning investors to stop dangerously chasing yield.

“In light of the current low interest-rate environment, we are watching particularly closely for instances of ‘reaching for yield’ and other forms of excessive risk-taking, which may affect asset prices and their relationships with fundamentals,” Bernanke said.

Top U.S. money managers also raised concerns at an informal discussion with the president of the New York Federal Reserve Bank, William Dudley, in April about the large inflow of dollars from mom-and-pop investors into fixed-income funds over the past few years.

The minutes from the group’s meeting of the Investor Advisory Committee on Financial Markets said the managers discussed how the Fed’s efforts to keep interest rates low in order to spark economic growth had created a “larger footprint of retail accounts in credit markets” and “fixed income instruments.”

The Financial Industry Regulation Authority, Wall Street’s industry-funded watchdog, meanwhile, has warned investors and brokers alike about the risk rising interest rates pose to bond funds, an attempt to stave off lawsuits filed by jilted clients down the line.

Even so, Gross and Doubleline Capital’s chief executive officer, Jeffrey Gundlach, are still fans of Treasuries.

Gundlach told Reuters on Thursday: “Not only do Treasuries look attractive, but they have been outperforming everything. ‘Down a little’ is the new ‘up’, for now anyway.”