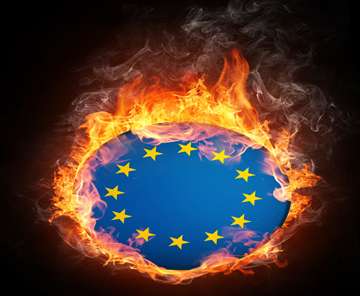 BRUSSELS, July 8 (Reuters) – The euro zone must decide on Monday how to keep Greece on a lifeline but is divided over whether to delay aid payments to Athens in an attempt to force through unpopular reforms ranging from sacking public workers to selling state assets.

A split in Greece’s governing coalition over how to shrink the country’s public sector has cast doubt upon Athens’ ability to meet the demands of its bailout programme, although Finance Minister Yannis Stournaras said on Sunday much had been done to reassure international creditors. (Full Story)

Eager to avoid a reawakening of the bloc’s debt crisis and mindful of elections in Germany in September, euro zone finance ministers meet at 1500 CET (1300 GMT) and will also want to hear from Portugal after last week’s political upheaval.

“This is a delicate moment and we cannot drop our guard,” said a senior euro zone official involved in preparing the talks. “Nobody wants a return of the crisis.”

Greece, which lived beyond its means for more than a decade, has been kept from defaulting by emergency loans since May 2010.

It hopes to get the go-ahead for the release of 8.1 billion euros ($10.5 billion) as part of its 240-billion-euro rescue package, which it needs in part to pay back 2.2 billion euros of bonds in August.

In week-long talks in Athens that ran into Sunday, the Greek government said it was close to convincing the troika of international lenders – the International Monetary Fund, the European Commission and the European Central Bank – that it can meet targets on reforming its economy.

But German Chancellor Angela Merkel, who is seeking a third term in elections on Sept. 22, wants to avoid being seen at home as too generous to spendthrift countries. Berlin is unlikely to support a full disbursement to Greece on Monday evening, officials told Reuters.

The next tranche could be paid in instalments, which would be conditional on Athens meeting so-called milestones on Greek reforms, such as cutting state jobs or privatisations.

Olli Rehn, the EU’s commissioner in charge of economic affairs, confirmed on Friday that this was an option, although over the weekend he struck a cautiously optimistic tone.

“The ball is in the Greek court and it depends on whether Greece is able to deliver the remaining elements of the milestones that have been agreed,” he told Reuters in France. (Full Story)

Greek officials said the troika agreed to give Athens more time to make public sector staff cuts and that 25,000 state workers must be moved into a so-called mobility scheme by the end of 2013 – to be transferred or laid off within a year.

Euro zone finance ministers, accompanied by ECB President Mario Draghi, will also deliver a firm message to Portugal that last week’s political instability must not derail its plan to return to the debt market in 2014.

Vitor Gaspar, the architect of Portugal’s austerity drive under the bailout, resigned last week, citing a lack of public support for cuts into welfare benefits and tax hikes. Unemployment is at a record high of nearly 18 percent.

Hoping to end a rift that threatened to bring down the government, Portugal’s prime minister promoted the head of the junior coalition party to be his deputy on Saturday. (Full Story)

“The ministers will give Portugal the message that the country should stick to its obligations,” said a euro zone official, who added that the country had funds that give it, unlike Greece, some room for manoeuvre.

Still, Portugal’s new finance minister, Maria Luis Albuquerque, is a familiar face to the euro zone ministers, having earlier attended their meetings as an official. “We are reassured by the new minister, by everything we know about her,” Draghi told a news conference last week.

The uncertainty has caused unease in Ireland, which is due to return to normal market borrowing and exit its bailout programme in coming months.

“The problems of Portugal and Greece keep on coming back to haunt us,” said John Fitzgerald of the Economic and Social Research Institute, a Dublin-based think tank. “With the crisis not put to bed, we are walking in a minefield.” ($1 = 0.7744 euros)