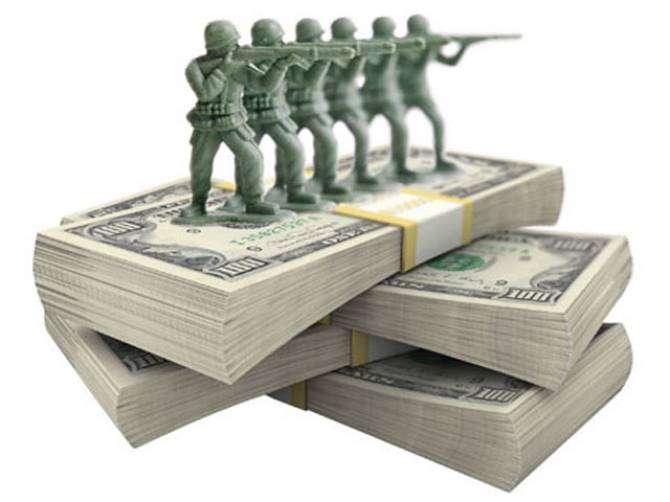 Stuffed with tax increases aplenty, the budget has already started drawing flak from politicians for its inflationary impact but faced with opposition, Finance Minister Ishaq Dar is offering a near impossible barter – trading a 1% increase in sales tax with a Rs50 billion cut in military spending.

The offer, made on Monday during a meeting of the Senate Standing Committee on Finance, came after Senator Haji Adil proposed a 50% reduction in the military’s non-development non-salary budget.

On hearing the proposal, Dar seized the moment by announcing that if the parliament could convince the secretary defence to reduce his budget by Rs50 billion, he would withdraw his 1% increase in the sales tax which is expected to fetch an additional revenue of Rs60 billion.

Defending his pronouncements during a discussion on proposed budgetary measures Dar said “I am convinced that the military has been given due defence budget but still the senators can try to convince the secretary defence”, said Dar.

The military had sought over Rs700 billion but the government only allocated Rs627 billion, he added. However, the finance minister did not talk about the hidden budget that the military receives over and above its stated budget.

Monday’s meeting also sprang some surprises on the actual impact of tax initiatives taken in the budget. Dar’s revelation that a 1% increase in the sales tax will bring an addition of Rs60billion in the government exchequer surprised many.

The figure presented in Monday’s Senate committee meeting was double the amount announced earlier on the eve of the budget. On June 12 chairman Federal Board of Revenue (FBR) had announced that the government will collect an additional Rs30 billion due to the increase in sales tax rate.

Based on the figure of Rs30 billion, Dar had stated that the government had taken additional tax measure of Rs202.6 billion in the budget. However, the revelation unveiled that the actual additional revenue generated by new tax measure would actually be higher than announced by Rs30 billion.

Raising the spectre of budget manipulation was another disclosure by the finance czar. According to Dar, the 0.5% levy on movable assets will fetch Rs15 billion in additional tax revenue – Rs8.5 billion higher than the figure quoted by chairman FBR, who had claimed earlier that only Rs6.5 billion would be collected from this levy.

Dar ruled out the possibility of lowering tax rates, arguing that the move would risk reducing next year’s revenue target of Rs2.475 trillion. He added that if the tax target could not be achieved in the coming year, the Rs540 billion allocated in development spending would be adversely affected.

Urging parliamentarians to give only budget-neutral suggestions, the finance minister appealed to the standing committee not to play to the gallery and avoid politics on the budget.

“We cannot play with the economy anymore”, he said when highlighting the need to strengthen the economy and revive the country’s plummeting growth rate.

Sounding a note of guarded optimism, Dar said that the government took a difficult decision when it introduced fiscal adjustments to the tune of 2.5% of gross domestic product (GDP). He briefed the senators that the government projected a budget deficit of 6.3% by end of next fiscal year, showing an improvement of 2.5% or Rs655 billion, over the current year.