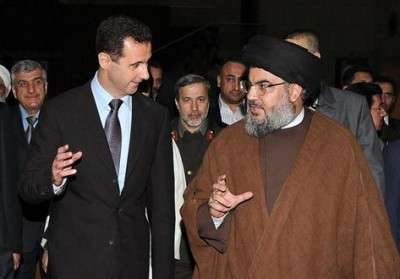 Lebanese Army soldiers stand atop of their army vehicle as they secure the area, during a protest organised by Syrians living in Lebanon in support of Syria’s regime, in Sidon, southern Lebanon, May 12, 2013.

DUBAI, June 12 (Reuters) – Shi’ite Muslims in the Gulf, alarmed by the shrill sectarian rhetoric of some Sunni clerics after Lebanon’s Hezbollah militia entered Syria’s civil war, fear they will be blamed and may be victimised for the bloodshed.

“Hate language is on the rise, in the press, on social media and even at lectures in mosques. Shi’ites in general are being blamed for what’s happening in Syria,” said Waleed Sulais, a researcher at the Saudi Adalah Centre for Human Rights.

Emotions over the Syrian conflict have been stoked by gory online videos depicting atrocities in stark language that plays on the Sunni affiliation of most of the rebels and on President Bashar al-Assad’s Alawite family, an offshoot of Shi’ite Islam.

Respected Muslim religious figures have now lent a measure of authority to inflammatory online sectarian material, casting the conflict as part of a wider Sunni-Shi’ite struggle.

The influential Sunni cleric Youssef al-Qaradawi urged Sunnis to join a jihad (holy war) in Syria, and his Qatar-based International Association of Muslim Scholars has called for a “day of rage” over the conflict next Friday.

In Egypt, the most populous Arab state, a senior preacher from the ruling Muslim Brotherhood, Salah Sultan, called the Shi’ite Hezbollah (party of God) movement “the party of Satan” in a nationally televised sermon last Friday.

Such talk has aggravated a geopolitical split between countries allied to Shi’ite power Iran and those aligned with Gulf Sunni states, a divide that has turned into an all-out proxy war in Syria.

“There is a very raw sectarian nerve that is being twitched and stroked in the Gulf Cooperation Council countries right now,” Sheikh Mohammad al-Mubarak al-Sabah, Kuwaiti Minister for Cabinet Affairs and a Sunni Muslim, told Reuters.

Gulf Arab states have been among the rebels’ main supporters while Iran has backed Assad with arms and cash, and encouraged fighters from its Lebanese ally Hezbollah to join the struggle.

While Sunni volunteers have swelled rebel ranks, the rebels report that large numbers of Shi’ite fighters are now crossing into Syria from Iraq, another Gulf state with its own deepening sectarian divide, to help Assad, whose forces are massing for an offensive on the northern city of Aleppo.

Some Sunni clerics have extended their verbal assault to local Shi’ites, who are a minority group in Saudi Arabia and Kuwait but a majority in Bahrain, branding them tools of non-Arab Iran.

“Everything that happens in Syria or Lebanon has an impact everywhere in the region,” said Jihan Kazerooni, vice president of the Bahrain Rehabilitation and Anti-Violence Organisation (BRAVO). “As a Bahraini woman, I am afraid of a sectarian war.”
SUSPICION, DISCRIMINATION

Mutual suspicion has fuelled a historic rift in Islam that began after the death of the Prophet Mohammad in 632 AD. Shi’ites, followers of the Prophet’s son-in-law Ali and his descendants, complain of systematic discrimination and neglect of their communities.

“In times of high tension, like the times we are going through now, these unfortunate sectarian issues rise up to the surface,” said Alanoud Alsharekh, a senior fellow at the International Institute for Strategic Studies.

Videos posted on the Internet from the battlefront in Syria have served to polarise Gulf Arabs, whose Shi’ite communities increasingly complain they are seen as Iranian agents.

Shi’ites point to the recent digging up by rebels near Damascus of the grave of a seventh-century figure revered by Shi’ites, and the filmed cutting out of the heart of a Syrian government soldier by a rebel fighter as examples of what could happen to them if hardline Islamists take charge.

For their part, Sunnis say Assad’s forces have committed countless massacres in their struggle to shield the president from being overthrown.

“What is dangerous about this issue is that while the media may target Hezbollah, all the Shi’ites are implicated in this,” Sulais said. “Everybody is regarded as a Hezbollah supporter.”

Although Syria is ruled by the secular pan-Arab Baath party, many Gulf Arabs fear a victory by the Iranian-backed Assad could extend Tehran’s influence across what Jordan’s King Abdullah once called a Shi’ite crescent stretching from Tehran to Beirut.

Sunni-led Gulf Arab states accuse Iran of being behind an uprising by Bahrain’s majority Shi’ites in 2011 that threatened the Sunni monarchy, and blame them for occasional protests by minority Shi’ites in eastern Saudi Arabia.

Riyadh has also blamed Iran for an alleged plot to kill its ambassador in Washington, and has also rounded up a number of people accused of espionage for Tehran.

When Assad’s forces, backed by Hezbollah fighters retook Qusair town last week, some Saudis saw that as an Iranian win.

“If Bashar al-Assad’s regime survives, Iran and Hezbollah will also be victorious. Thus, it is not an exaggeration to say that this is a decisive battle for the Gulf states, Jordan and Lebanon, and before them all Syria,” Rashed said.

Although some conservative clerics who have blasted Shi’ites are close to Gulf Sunni governments, the increasingly sectarian language does not necessarily have official backing.

In 2003, Saudi Arabia set up the King Abdulaziz Center for National Dialogue as a venue to promote understanding. Last year King Abdullah said a centre to study Muslim sects was being set up, a statement seen as sending a message to Sunni clerics that they should regard Shi’ites as proper Muslims.

Now, however, Sulais said he feared years of efforts by Gulf governments to improve relations between Sunnis and Shi’ites “are being wasted”.

Despite the high tensions, there has been virtually no incident of friction in countries with mixed populations, thanks to strong government policies that do not tolerate to strife. So harsh words have yet to turn into deeds.

“Today, more than ever, we need to shy away from aggravating the sectarian spasm and confessional tensions, and to work to create a positive climate and prepare the ground to contain all forms of partisanship and agitation,” Sheikh Nasser al-Asfour, a Bahraini cleric, said according to al-Wasat daily on Sunday.

Sheikh Abdullah Ahmed al-Youssef, in a Friday sermon in the mostly Shi’ite Saudi city of Qatif, expressed sorrow at what he called “the dangerous division” that Muslims are living through. He noted that more Muslims have died at the hands of fellow Muslims than at the hands of Israel.