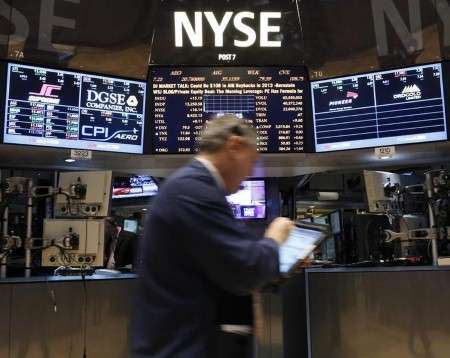 INVESTORS POURED $4.8 BLN INTO STOCK FUNDS AHEAD OF FED

INVESTORS POURED $4.8 BLN INTO STOCK FUNDS AHEAD OF FED

NEW YORK, June 21 (Reuters) – Investors worldwide poured $4.8 billion into stock funds in the latest week, reversing the prior week’s outflows, on expectations that the U.S. Federal Reserve would keep its bond-buying steady, data from EPFR Global showed on Friday.

The inflows into stock funds in the week ended June 19 came largely ahead of Fed Chairman Ben Bernanke’s comments on Wednesday that the central bank could reduce its bond-buying later this year. The inflows reversed outflows of $8.51 billion the previous week, and were the first cash gains in four weeks, fund-tracking firm EPFR Global said.

“There was a widespread expectation that Bernanke would give out a more dovish statement,” said Michael Jones, chief investment officer of RiverFront Investment Group in Richmond, Virginia.

The S&P 500  .SPX rose 1 percent over the week on expectations that the Fed would keep its $85 billion in monthly purchases of Treasuries and agency mortgages unchanged. Bernanke disappointed stock markets when he said at a news conference on Wednesday that the central bank would reduce its stimulus later this year if the economy is strong enough.

The Fed’s stimulus underpinned a 17 percent rise in the S&P 500 from the beginning of the year through May 21. U.S. stocks turned more volatile when Bernanke said on May 22 that the Fed could reduce its bond-buying later this year if the U.S. economy looked set to maintain momentum.

Funds that hold Japanese stocks gained $657 million in new cash, EPFR Global said, despite the slide in Japanese stocks since hitting their peak on May 23. Japan’s Nikkei average fell 8.6 percent between May 23 and the end of EPFR Global’s most recent reporting period.

The new demand for stocks did not apply to funds that hold emerging market stocks, which suffered outflows of over $3 billion, according to EPFR Global. The MSCI Emerging Markets Index  .MSCIEF fell 0.8 percent over the reporting period.

While stock funds overall saw new demand, bond funds worldwide suffered outflows of $7.48 billion over the week, according to EPFR Global. That amount was, however, roughly half the previous week’s record outflows of $14.45 billion.

Those outflows marked an improvement from the prior week, however, when investors pulled $6.48 billion out of the funds, the second most since EPFR began tracking the funds in May 2003.

Prices on high-yield debt have dropped since Bernanke’s statements in May. The yield-to-worst on the Barclays U.S. Corporate High Yield Index is currently 6.54 percent, far above its record low of 4.97 percent on May 7. The yield-to-worst is the lowest potential yield on a bond without the issuer defaulting. Prices fall as yields rise.

Along with emerging market stock funds, funds that hold emerging market bonds suffered outflows of $2.6 billion in the latest week, their second highest on record according to Bank of America Merrill Lynch.

The selloff in bonds and outflows from bond funds stem from fears of rising interest rates, said Robert Stein, global head of asset management at Astor Asset Management. Stein said, however, that bonds have become attractive at current levels.

“They’ve backed up to a point where it’s gotten overdone,” Stein said on the bond market selloff in the wake of Bernanke’s statements last month.

Money market funds, which are low-risk vehicles that hold short-term securities, suffered outflows of more than $25 billion in the latest week, the most since the third week of February according to EPFR Global. Brandt said that investors pulled cash out of money market funds on expectations that the Fed would continue its bond-buying, which would encourage investments in assets such as stocks.

Funds that hold bank loans remained a refuge for investors and attracted $1.5 billion in new cash in the latest week after pulling in $1.4 billion the previous week. Bank loans are protected from rising interest rates by being pegged to floating-rate benchmarks.