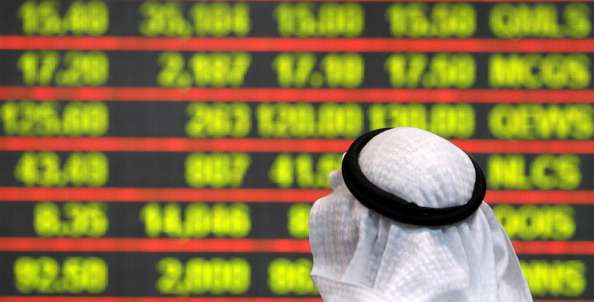 0707 GMT – United Arab Emirates markets surge in early trade after MSCI reclassified them to emerging market status, with blue chips that could be included in MSCI indexes leading gains.

0520 GMT – Stock markets in the United Arab Emirates and Qatar are likely to rise after equity index provider MSCI decided to upgrade them to emerging market from frontier status, but gains will be modest since the decision was largely anticipated and the global environment is weak.

MSCI’s decision is an important step in developing the Gulf as a destination for equity investment, so it may help to support markets around the region today. (Full Story)

HSBC estimated the upgrades, to take effect in May next year, would give the UAE a 0.33 percent weighting in the MSCI Emerging Markets Index and Qatar 0.38 percent, ranking them above Czech Republic, Egypt and Hungary.

But the amount of additional fund inflows implied by the upgrade may be small compared to the size of the markets. HSBC projected $370 million of inflows for the UAE and $420 million for Qatar; the markets’ capitalisations are about $140 billion and $110 billion.

In the case of the UAE, some of that money may already have arrived, since analysts had believed the UAE had a good chance for an upgrade following reforms of its markets. Qatar’s upgrade is more of a surprise, so Qatar may get a bigger boost today.

“This was not completely unexpected. But it was a 50-50 chance and I think the market has not fully priced it yet. It was more of a retail trading opportunity so far. I would expect a very strong opening,” said Marwan Shurrab, fund manager and head of trading at Vision Investments in Dubai.

However, the Dubai market is already up 45.3 percent this year, Abu Dhabi .ADI 35.6 percent and Qatar .QSI 11.9 percent. So with global markets weak because of concern about rising U.S. interest rates, there may be little appetite to chase stocks higher in the short term. (Full Story)

Sam Vecht, portfolio manager at BlackRock, said he welcomed MSCI’s decision but “it is unlikely to have any significant near-term impact on how we manage our client portfolios.

“We have been broadly positive on both of these countries for the last two years as the combination of economic restructuring post financial crisis, strong earnings growth, depressed valuations, and high dividend yields offers an attractive proposition.”

Mohammed Yasin, head of National Bank of Abu Dhabi’s brokerage unit, said: “In the short term, for today and tomorrow, we expect to see more volatility in the markets and will not be surprised if the market closes down one of these days. You definitely won’t get institutional investors jumping in to buy into these markets until the indices are included in the benchmark.

“We are seeing on the one hand some new orders coming in. but there are also some investors trying to book profits.”

Morocco’s stock market looks set to fall after MSCI dowgraded it to frontier status, saying it had failed to meet liquidity requirements for several years and the downtrend had shown no sign of reversal.

The Moroccan market .MASI had already been falling in anticipation of a downgrade, but Moroccan authorities had been lobbying MSCI to remain an emerging market so the decision will still disappoint investors. (Full Story)

MSCI also said it was monitoring Egypt’s market .EGX30 with particular concern over the recent shortage of foreign currency on the domestic foreign exchange market.

“MSCI may be forced to launch a public consultation with the investment community on a potential exclusion of the MSCI Egypt Index from the MSCI Emerging Markets Index were the situation on the Egyptian foreign exchange market to worsen and result in the inability of international investors to repatriate their funds,” it said.