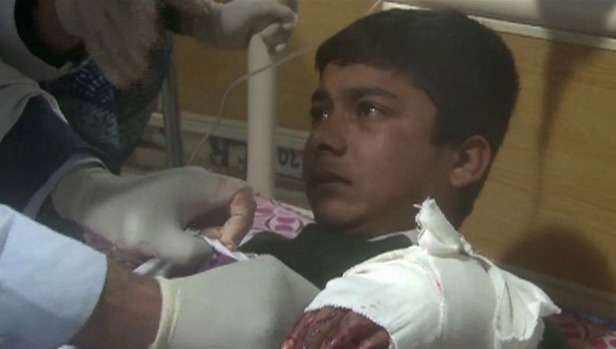 ‘I SAW DEATH SO CLOSE’

‘I SAW DEATH SO CLOSE’

Survivors recall their nightmare of gunmen hunting down students beneath benches

A teenage survivor of Tuesday’s Taliban attack on a Pakistani school described how he played dead after being shot in both legs by insurgents hunting down students to kill.

Militants rampaged through an army-run school in the northwestern city of Peshawar and killed at least 130 people, most of them children, in one of the bloodiest attacks in Pakistan.

Speaking from his bed in the trauma ward of the city’s Lady Reading Hospital, Shahrukh Khan, 16, said he and his classmates were in a careers guidance session in the school auditorium when four gunmen wearing paramilitary uniforms burst in.

“Someone screamed at us to get down and hide below the desks,” he said, adding that the gunmen shouted “Allahu akbar” (God is greatest) before opening fire.

“Then one of them shouted, ‘There are so many children beneath the benches, go and get them’,” Khan said.

“I saw a pair of big black boots coming toward me, this guy was probably hunting for students hiding beneath the benches.”

Khan said he felt searing pain as he was shot in both his legs just below the knee.

He decided to play dead, adding, “I folded my tie and pushed it into my mouth so that I wouldn’t scream.

“The man with big boots kept on looking for students and pumping bullets into their bodies. I lay as still as I could and closed my eyes, waiting to get shot again.

“My body was shivering. I saw death so close, and I will never forget the black boots approaching me – I felt as though it was death that was approaching me.”

The Army Public School is attended by boys and girls from both military and civilian backgrounds.

As his father, a shopkeeper, comforted him in his blood-soaked bed, Khan recalled: “The men left after some time and I stayed there for a few minutes. Then I tried to get up but fell to the ground because of my wounds.

“When I crawled to the next room, it was horrible. I saw the dead body of our office assistant on fire,” he said.

“She was sitting on a chair with blood dripping from her body as she burned.”

It was not immediately clear how the female employee’s body caught fire, although her remains were also later seen by an AFP reporter in a hospital mortuary.

Khan, who said he also saw the body of a soldier who worked at the school, crawled behind a door to hide and then lost consciousness.

“When I woke up I was lying on the hospital bed,” he added.

Another student, Abdullah Jamal, said that he was with a group of students in grades 8, 9 and 10 who were getting first-aid training with a team of Pakistani army medics when the violence began.

When the shooting started, Jamal, who was shot in the leg, said nobody knew what was going on for the first few seconds.

“Then I saw children falling down who were crying and screaming. I also fell down. I learned later that I have got a bullet,” he said, speaking from his hospital bed.

Another student, Amir Mateen, said they locked the door from the inside when they heard the shooting but gunmen blasted through the door anyway and began shooting.