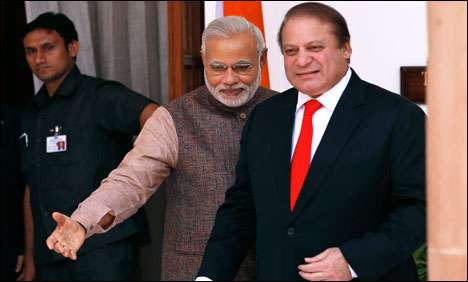 NEW DELHI, May 27 (Reuters) – Indian Prime Minister Narendra Modi delivered a blunt warning to old adversary Pakistan on his first day in the job on Tuesday, telling his counterpart in a rare meeting that Islamabad must prevent militants on its territory from attacking India.

Despite the directness of his message, both sides said Modi’s meeting with Pakistani Prime Minister Nawaz Sharif in New Delhi was cordial and they agreed to try to restart peace talks between the nuclear-armed rivals.

They also agreed to pursue normalising trade ties, which have been held hostage to distrust between their countries after fighting three wars since independence from Britain in 1947.

Modi, 63, invited Sharif and several other South Asian leaders for his swearing-in ceremony on Monday. Unprecedented in India’s history, the invitations were seen as a reflection of Modi’s eagerness to play a prominent role on the global stage following a stunning election victory for his Hindu nationalist Bharatiya Janata Party (BJP).

After Tuesday’s 50-minute meeting between Modi and Sharif, India said the new prime minister had underlined “concerns relating to terrorism”.

“It was conveyed that Pakistan must abide by its commitment to prevent its territory and territory under its control from being used for terrorism against India,” Foreign Secretary Sujatha Singh told a news conference.

Modi also pressed for speedy progress of trials in Pakistan of people accused of masterminding a 2008 commando-style attack on the city of Mumbai in which 166 people were killed.

“A NEW PAGE IN RELATIONS”

The BJP has long advocated a tough stance on Pakistan, and Modi has been seen as a hardliner on issues of national security. In that respect, Modi’s invitation to Sharif was a surprise and raised hopes for a thaw in relations, which have been particularly frosty since the Mumbai attacks.

Responding later, Sharif sounded a conciliatory note, describing the meeting as a historic opportunity to turn “a new page in our relations”. However, he rebuffed assertions that Pakistan was a launch pad for militants to attack India.

“We have to strive to change confrontation to cooperation: engaging in accusations and counter-accusations would be counter-productive,” he said.

Modi also held talks with Hamid Karzai, outgoing president of Afghanistan, a country over which India and Pakistan are vying for influence as Western troops prepare to withdraw.

Karzai told Indian TV that, according to information given to him by a Western intelligence agency, the Pakistan-based militant group Lashkar-e-Taiba (LeT) was responsible for an attack last week on India’s consulate in the western Afghanistan city of Herat.

The LeT, which has also been blamed for the Mumbai attack, has long targeted Indian interests and New Delhi has accused Islamabad of shielding, or working with, the group.

“They wanted to cause embarrassment to both Afghanistan and India around that inauguration of the new prime minister,” Karzai told Times Now.

Karzai, who has presented India with a wish-list of weapons to tackle Islamist Taliban militants after the departure of foreign forces, said some on the list had already been offered and he was confident that Modi would consider the rest favourably.

Pakistan took three days to decide whether to accept Modi’s invitation, a signal that there were sharp differences on the matter in a country where the military has traditionally called the shots on security and foreign policy.

Still, the two leaders were seen shaking hands and laughing together on Monday, and in the briefings later there was no mention of the disputed Himalayan territory of Kashmir, over which their countries have gone to war twice.

The low-caste son of a tea stall-owner, Modi won India’s first parliamentary majority this month after 25 years of coalition governments, giving him ample room to advance economic reforms that started more than two decades ago but stalled in recent years.

In its first meeting on Tuesday, Modi’s cabinet set up a high-powered team packed with members of the intelligence services to uncover the vast proceeds of corruption that are squirrelled away abroad and out of the taxman’s reach.

“We have to restore back the pace of growth, contain inflation and obviously concentrate on fiscal consolidation itself,” the new finance minister told reporters.

Public finances are in dire straits as government spending has outpaced revenues. The new administration will immediately need to take a decision on cutting subsidy spending which is threatening a budget blow-out and a sovereign ratings downgrade.

Jaitley, a student leader who was jailed during a period of emergency rule in 1975, will also be handling the important defence portfolio for the transition.

Modi, who built his reputation as an economic moderniser by putting his home state of Gujarat on a high-growth path, has moved to streamline the cabinet towards a more centralised system of governing.

Several government ministries have been clubbed under one minister, aimed at breaking decision-making bottlenecks widely blamed for dragging down economic growth. The new administration has 45 ministers compared with 71 in the outgoing government.

“I am sure the political change itself sends a strong signal to the global community and also domestic investors,” Jaitley said. “I think over the next few months by expediting decision-making processes, I am sure we will be able to build that.”

BJP chief Rajnath Singh will be interior minister, charged with the task of ensuring internal stability and calming the anxieties of India’s religious minorities who see his party and its hardline Hindu affiliates as pursuing a partisan agenda.

Modi himself has been dogged by allegations that he did not do enough to protect Muslims during an upsurge of violence in 2002. He has denied the charge and a Supreme Court-ordered investigation acquitted him of any responsibility.