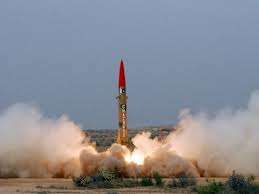 The army said the successful test has been warmly appreciated by the president and prime minister of Pakistan who congratulated the participating troops, scientists and engineers on their outstanding achievement.

The missile can hit some areas in neighboring India, which also routinely conducts nuclear-capable missile tests and some such missiles can reach any part in Pakistan.

Pakistan conducted tit-for-tat nuclear tests in 1998 after India carried out nuclear tests. Both also have different series of missiles. The two countries have fought three wars, two over the Kashmir dispute, since their independence in 1947.

Addressing the troops in the exercise area, the chairman of Joint Chiefs of Staff Committee commended the troops on achieving technical and operational excellence in operating the state of the art weapon system.

He expressed his satisfaction over the training goals achieved during the exercise and expected that the officers and soldiers entrusted with the task of deterring aggression would continue to maintain professional excellence.

Rashad Mahmood also congratulated all the scientists and engineers for the successful launch of Ghaznavi Missile, hailing it as another mile stone which has further strengthened the defense potential of Pakistan besides assuring peace in the region.