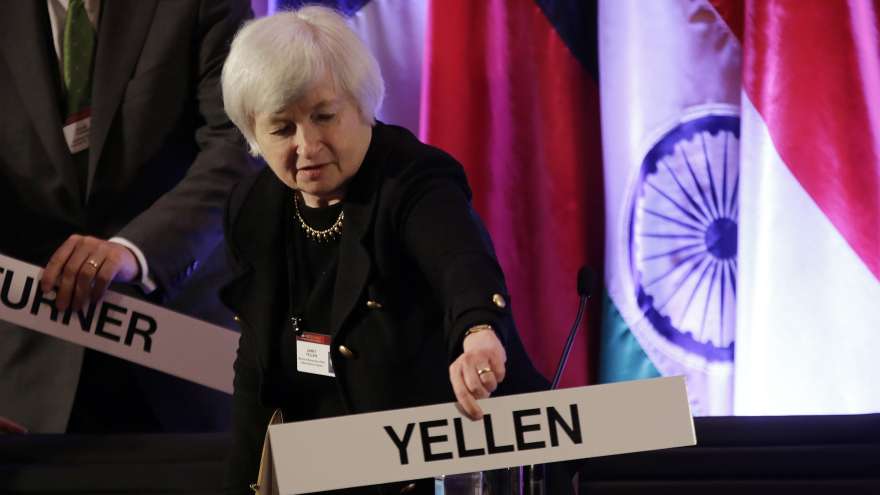 FED MAY RAISE RATES AS SOON AS NEXT SPRING, YELLEN SUGGESTS

FED MAY RAISE RATES AS SOON AS NEXT SPRING, YELLEN SUGGESTS

Yellen’s remarks at her first news conference as the head of the central bank pointed to a more aggressive path toward higher interest rates than many had anticipated, and bets in financial markets shifted accordingly.

The comments came after a two-day meeting in which Fed officials made another reduction in their bond-buying stimulus and decided to jettison a set of guideposts they were using to help the public anticipate when they would finally raise rates.

The Fed said the change in its rate hike guidance did not mark a shift in its intentions and that it would wait a “considerable time” after shuttering its asset purchase program before pushing borrowing costs higher.

Yellen, who had fielded numerous questions without a hitch, hesitated when asked what the Fed meant by “considerable.”

“I — I, you know, this is the kind of term it’s hard to define, but, you know, it probably means something on the order of around six months or that type of thing. But, you know, it depends — what the statement is saying is it depends what conditions are like.”

Several analysts wondered whether her answer was an unintended slip, given the deliberately vague language of the Fed’s statement.

Either way, the reaction in financial markets was swift and sharp. Prices for U.S. stocks and government bonds added to earlier losses triggered by fresh Fed forecasts that showed policymakers are inclined to raise rates a bit more aggressively than they had been just a few months ago. The U.S. dollar rose.

“The forecast change could be interpreted as a relatively hawkish shift … and as such the general market reaction seems well-founded,” said JPMorgan economist Michael Feroli.

Futures traders moved to price in a first interest rate hike as soon as April 2015. Previously, it was July.

Most top Wall Street economists, however, continued to see the first rate hike in the second half of 2015, according to a Reuters poll. (Full Story)

Yellen sought to use her news conference to emphasize that rates would stay low for awhile and rise only gradually. She also said they could end up staying lower than normal “for some time” even after the jobless rate drops to a healthy level.

The Fed would look not only at how close inflation and unemployment are to its goals, but how fast, or slowly, those measures are approaching those goals, she said.

At 6.7 percent, the unemployment is well above the 5.2 percent to 5.6 percent range Fed officials see as in keeping with full employment. The central bank’s favored inflation gauge is barely more than half of its 2.0 percent target.

The Fed has held interest rates near zero since late 2008 and has pumped more than $3 trillion into the economy with its bond purchases to try to foster a stronger recovery.

Of the Fed’s 16 policymakers, only one believes it will be appropriate to raise rates this year; 13 expect a first rate hike next year, and two others see the first rate hike coming in 2016, according to the new forecasts.

But once rate hikes start, Fed officials see slightly sharper increases than they did in December, when they last issued forecasts. They now see rates ending 2016 at 2.25 percent, a half percentage point above their December projections. Full Story]

The unease in markets “might be a sign that people think Yellen will tighten sooner rather than later,” said Wayne Kaufman, chief market analyst at Rockwell Securities in New York.

The central bank proceeded with its well-telegraphed reductions to its massive bond-buying stimulus, announcing it would cut its monthly purchases of U.S. Treasuries and mortgage-backed securities to $55 billion from $65 billion.

The decision to further scale back its stimulus keeps the Fed on track for the measured wind down laid out by Yellen’s predecessor, Ben Bernanke. The Fed repeated that it plans to continue trimming the purchases in “measured steps” as long as labor conditions continue to improve and inflation shows signs of rising back toward the Fed’s 2.0 percent goal.

The Fed’s assessment of the U.S. economy chalked up recent weakness partly to adverse weather.

It had said since December 2012 that it would not consider raising short-term rates until the jobless rate fell to at least 6.5 percent, as long as inflation looked set to remain contained.

But the unemployment rate has fallen faster than anticipated, and officials dropped the guidance, saying they would look at a range of economic indicators to judge the economy’s readiness for higher rates.

Minneapolis Fed President Narayana Kocherlakota dissented, saying that getting rid of the numerical guidance could hurt the credibility of the Fed’s commitment to return inflation to 2.0 percent.