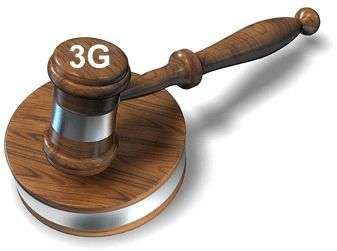 Pakistan is set to hold long-awaited auctions for 3G and 4G network licences on April 23, a step the government projects will raise $2 billion to boost the country’s foreign reserves.

But officials say there has been scant interest in Monday’s bidding process and estimate Pakistan will raise no more than $850 million.

“The finance minister (Ishaq Dar) is very angry, so much so that he wants to call off the auction if we are so embarrassingly off target,” said an official on his team, who declined to be identified as he is not authorised to speak officially on the matter.

“This has happened because of an over enthusiastic IT ministry which oversold an undercooked plan to its fiscal managers. It looks like heads may roll on this one.”

Pakistan is the only major country in the region that still does not offer 3G services. Its neighbour, war-ravaged Afghanistan, switched to 3G services in 2012.

There are about 132 million mobile phones in use in Pakistan, a country of 180 million people, according to the Pakistan Telecommunication Authority.

Pakistan’s telecommunications market was deregulated in 2004 and foreign firms such as Etisalat ETELZS.UL have invested heavily in recent years.

The finance ministry said in February that Pakistan would sell both the 3G and the more advanced 4G LTE spectrum. Selling just 3G licences could raise $2 billion, and bundling them with 4G spectrum could generate between $4 billion and $5 billion, finance minister Ishaq Dar had estimated.

The 3G spectrum auction was expected to raise Pakistan’s gross domestic product by $8 billion and indirectly create up to 900,000 new jobs, a government-commissioned study by Plum Consulting said.

But when bidding closed at 4 pm on Monday, only four out of five cellular mobile companies operating in Pakistan had submitted bids and no new companies showed interest, sources privy to the bidding told Reuters.

Warid Telecom Pakistan, owned by the privately-held conglomerate Abu Dhabi Group, did not submit a bid, said a source in the company. Neither did Turkcell and Saudi Telecom Company, two foreign companies who had earlier shown interest.

“The auction is thus expected to go for $863 million, nowhere close to $2 billion.”

Bids for 4G LTE licences were to start at $210 million. No operator has shown any interest.

“It looks like 4G won’t fetch any money,” the finance ministry source said. “The disappointing bids are deepening the budget hole by almost $1.7 billion and are such a big hit the finance minister is ready to postpone the whole auction process.”

Spokesmen in the finance ministry, the IT ministry and telecom companies taking part in the bid said they were not authorised to officially comment on the issue.

The disappointing response will pile further pressure on embattled Information Technology Minister Anusha Rahman, who is overseeing the auction.

She drew criticism last month after appointing her husband to the Board of Directors at Ufone, one of the companies bidding for licences and partly owned by the government. He later resigned.