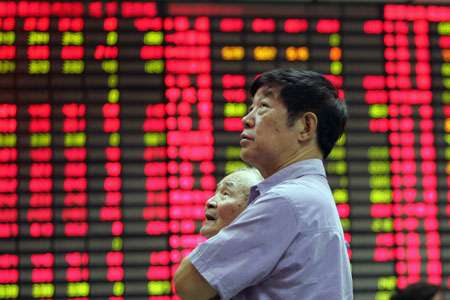 Asian stocks fell, with a gauge of Chinese shares in Hong Kong poised to enter a so-called bear market, after the Federal Reserve signaled it may raise U.S.interest rates from the middle of next year.

The MSCI Asia Pacific Index fell 1.7 percent to 132.42 as of 12:50 p.m. in Tokyo, heading for the lowest close since Feb. 6. About five shares dropped for each that rose on the gauge. The Fed said yesterday its key rate, currently near zero, would be 1 percent by the end of 2015 and 2.25 percent a year later.

“We’re going to see more follow-through selling in Asia,” Toby Lawson, head of futures, options and cash equities trading for Asia Pacific at Newedge Group SA in Sydney, said by phone. “It’s significant that the Fed fund rate will rise to 1 percent by the end of 2015. We could see capital outflows from emerging markets back into the U.S., especially given residual concerns about China’s economy slowing.”

The Shanghai Composite Index gained 0.4 percent, erasing losses of as much as 0.4 percent. China will speed up construction projects and other measures to support economic growth after a slowdown in industrial output and investment boosted risks of missing a 7.5 percent expansion target for the year.

The MSCI Asia Pacific Index lost 4.7 percent this year through yesterday, when shares on the gauge traded at 12.6 times estimated earnings. That compares with a multiple of 15.8 for the Standard & Poor’s 500 Index and 14.3 for the Stoxx Europe 600 Index.

Futures on the S&P 500 slipped 0.3 percent today after the U.S. benchmark index fell 0.6 percent yesterday. The central bank’s bond-buying program, which was reduced by another $10 billion to a $55 billion monthly rate, will be wound down by year-end with a rate increase to follow within six months, Chair Janet Yellen indicated.

Yellen said the quantitative-easing program used to stimulate the U.S. economy would end this fall should the central bank continue to taper in measured steps. There will be “considerable time” between the end of the stimulus and the first rate increase, meaning “six months or that type of thing,” she said.

Most Federal Open Market Committee participants reiterated their view that rates will be held at current levels until 2015. The median forecast for rates among 16 Fed officials rose from December, when they estimated the rate at the end of next year at 0.75 percent, and 1.75 percent for the end of 2016. Officials said they will look at a wide range of data in determining when to boost borrowing costs, dropping a pledge tying interest rates to a 6.5 percent unemployment rate.

“The FOMC was more hawkish,” said Anthony Valeri, a market strategist with LPL Financial Corp. in San Diego, which oversees $350 billion. “The expectation for higher rates got pushed forward and the bond market was not priced for that.”

The U.S. and Europe are moving to increase sanctions on Russia after President Vladimir Putinsigned an accord setting in motion Crimea’s accession to Russian territory. With visa bans and asset freezes on Russian officials failing to sway Putin, European Union leaders meet today to consider their next move.

Ukraine ordered the removal of its military from the majority Russian-speaking Crimea and said it will strengthen its deployments on the country’s border with Russia.