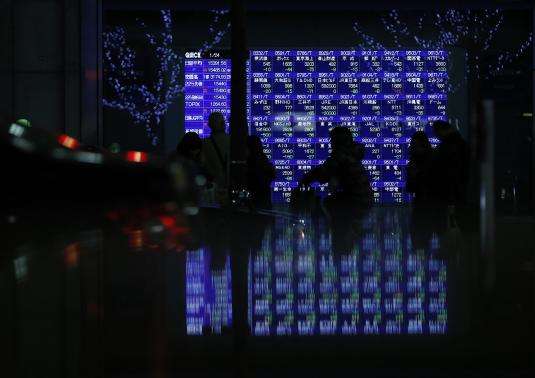 (Reuters) – Asian shares dropped to a one-month low and the yen pushed higher on Friday, as heightened tension in Ukraine ahead of a weekend referendum drove investors out of riskier assets.

Solid U.S. retail sales and employment data also reinforced expectations that the U.S. Federal Reserve will stick to its plan of gradually withdrawing its asset-buying stimulus, while Thursday’s disappointing Chinese economic data continued to add to the gloom.

MSCI’s broadest index of Asia-Pacific shares outside Japan .MIAPJ0000PUS fell 1.1 percent, touching its lowest level since mid-February and on track for a weekly loss of more than 2 percent.

Japan’s Nikkei stock average .N225 skidded 2.7 percent to a one-month low, on track for a weekly loss of more than 5 percent, as the currency soared.

“Short-term sellers like commodity trading advisors are also big players today and they are also reacting to the falling copper price,” he added.

Russia launched new military exercises near its border with Ukraine on Thursday, even as the U.S. cautioned that Moscow risked facing serious steps if annexation was the outcome of a referendum planned for Sunday in the Crimea.

The latest developments in the Ukraine crisis sent the perennial safe-haven yen soaring against both the dollar and the euro.

“Incoming data in the U.S. suggest the economy is emerging from weather-related distortions to activity,” strategists at Barclays wrote in a note to clients.

“We continue to expect the Fed to taper its monthly pace of asset purchases by another $10 billion at its meeting next week,” they said.

The yield on the benchmark 10-year U.S. Treasury note inched down to 2.652 percent in Asian trading from its U.S. close of 2.653 percent.

Data on Thursday showed China’s industrial output growth fell short of forecasts for the combined January/February period, and retail sales also came in weaker than expected. The disappointing figures fuelled fears of a slowdown in the world’s second biggest economy.

That continued to weigh on the Australian dollar, considered a proxy for China plays. The Aussie lost about 0.1 percent to $0.9023.

The euro also remained under pressure after comments from European Central Bank President Mario Draghi, who said the bank has been preparing additional policy steps to guard against deflation taking hold in the euro zone.

On the commodities front, copper slipped 0.2 percent to $6,403 a tonne, on track for its biggest weekly loss since April, on expectations of slower demand growth in China.

Gold, a safe-haven favourite, was on track for its sixth straight weekly rise, up about 0.1 percent to $1,371.18 an ounce after earlier hitting a fresh six-month high.

Brent crude held steady above $107 a barrel but remained on track for its third weekly loss, while U.S. crude edged down to $98.16 a barrel.