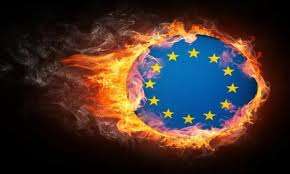 The Stoxx Europe 600 Index advanced 0.1 percent to 332.24 at 8:30 a.m. in London. The equity benchmark fell for a second consecutive month in July, posting its first back-to-back losses in more than two years. The gauge dropped 2.9 percent last week to close at its lowest level since April 16.

Global equities lost about $1.2 trillion in value last week amid concern that Argentina’s default and the crisis at Espirito Santo would constrict credit markets. Portugal’s central bank has taken control of Espirito Santo in a 4.9 billion-euro ($6.6 billion) bailout that will move most of the lender’s assets to a new company called Novo Banco, according to a statement yesterday. The lender’s shares plunged 73 percent last week before they were suspended on Aug. 1.

A gauge of banking stocks rebounded after dropping 3.2 percent in the final two days of last week. HSBC Holdings Plc, which accounts for 16 percent of the Stoxx 600 Banks Index, reports its first-half financial results at 9:15 a.m. in London.

Alcatel-Lucent gained 2.1 percent to 2.63 euros after Morgan Stanley upgraded the company to overweight, which is similar to a buy recommendation, from equal weight. The shares slid 21 percent from the beginning of this year through Aug. 1.

Hugo Boss AG dropped 1.4 percent to 104.55 euros. Permira Advisers LLP, which owns 56 percent of the German maker of luxury suits through its Red & Black Holding GmbH company, is in talks with advisers about a potential sale of its remaining stake, according to three people with knowledge of the matter.

To contact the reporter on this story: Sofia Horta e Costa in London at[email protected]