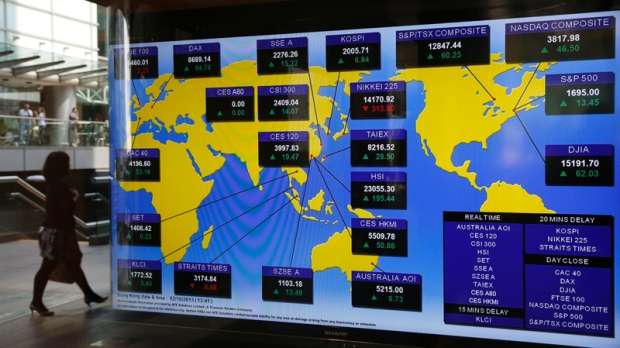 After falling sharply on Thursday, stocks in the region were trying to regain some of the losses. The Australian market edged up 0.5 percent  .AXJO while MSCI’s broadest index of Asia-Pacific shares outside Japan  .MIAPJ0000PUS added 0.4 percent.

Investors found some comfort in Wall Street’s ability to bounce with the S&P 500  .SPX closing up 0.6 percent and the Dow  .DJI 0.67 percent.

Japan’s Nikkei  .N225 will not be able to share the relief because it is a holiday there.

The U.S. dollar continued to benefit from Fed Chair Janet Yellen’s suggestion that the first increase in interest rates could come in the first half of 2015, which would be earlier than many had expected.

Just the thought of such a prospect was enough to lift two-year Treasury yields  US2YT=RR to their highest in six months and left them up 8 basis points for the week so far.

Clarity may not be forthcoming, however, as each has very different outlooks on policy stretching from the hawkish Fisher to the dovish Kocherlakota.

HOW FAR WILL IT FALL?

Attention in Asia was again be on China’s yuan which hit a one-year low on Thursday with the People’s Bank of China (PBOC) seemingly content with the decline. The currency has fallen more than 1.2 percent so far this week, which would be the largest weekly loss since 1992.

In early trade Friday the currency was steady at 6.2275 per dollar  CNY=CFXS but has had a habit of taking sudden lurches lower this week.

Government economists and advisers involved in internal policy discussions told Reuters that the central bank chose to widen the yuan’s trading band since it was less risky than other reform options while also offering a way to hedge against further economic slowdown. (Full Story)

A weaker yuan would provide some relief to struggling exporters and the PBOC has the means to steer it lower while avoiding sharp swings.

However, a major drop in the yuan could put pressure on other nations in the region to depreciate their currencies and keep their exports competitive.

Several currencies from the Thai baht to Malaysian ringgit have indeed turned lower over the last couple of days and dealers are watching nervously to see if that could be the start of a trend.