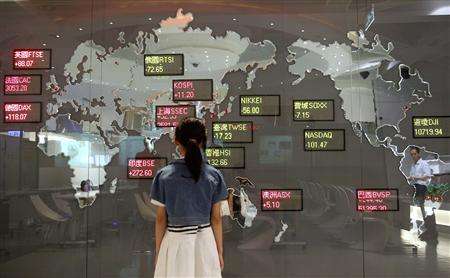 Spread betters expected a slightly lower open for Europe ahead of the Federal Reserve meeting minutes release later in the day. Britain’s FTSE  .FTSE was forecast to open as much as 0.1 percent lower, Germany’s DAX  .GDAXI down 0.1 percent and France’s CAX  .FCHI flat.

MSCI’s broadest index of Asia-Pacific shares outside Japan  .MIAPJ0000PUS was flat, treading water through the day.

Wall Street drew support from robust housing data on Tuesday, which pushed up Treasury yields and drove the dollar to a nine-month high against the euro.

“Risk-on moves continue to take place. Last week it was mostly led by equities, but now it is more widespread, resulting in safe-havens like Treasuries being sold,” said Junichi Ishikawa, market strategist at IG Securities in Tokyo.

“The resulting rise in Treasury yields has boosted the dollar, and we are seeing a more comprehensive risk off trend,” he said.

The euro hovered close to a nine-month low of $1.3303  EUR= reached during the session.

The New Zealand dollar fell to a five-month low as the greenback’s strength added to bearish factors including soft dairy prices and investor preference for the neighbouring Aussie dollar. AUD/

Strategists at Brown Brothers Harriman said the situation appeared to be developing into two tiers of risk, a lower one focused on ground conflict and a higher one centred on the international diplomatic arena.

“It seems as if markets are now entirely focused on the upper tier of risk, and have come to accept an escalation of the proxy military conflict on the ground between the two countries (Ukraine and Russia),” they wrote in a note to clients.

Later in the day investors will scrutinise the Federal Reserve’s minutes from the July 29-30 policy meeting, while looking forward to Fed Chair Janet Yellen’s speech on Friday at a gathering of central bankers in Jackson Hole, Wyoming.

The Fed minutes will again be scanned for any clues on when policymakers plan to raise U.S. interest rates, with a set of mixed data in recent months keeping traders guessing about the timing of the tightening cycle.

In commodities, gold was stuck firmly below $1,300 an ounce and looked likely to extend losses as the strong U.S. data bolstered stock markets, dimming bullion’s appeal as a safe haven. GOL/

Spot gold was little changed at $1,295.68 an ounce  XAU= after shedding 1.3 percent in the last three sessions.