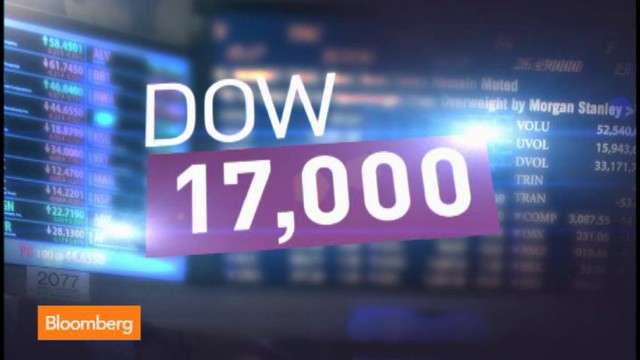 NEW YORK (MarketWatch) — U.S. stocks rebounded on Monday with the Dow Jones Industrial Average closing above 17,000 as a flurry of deal news and better-than-expected earnings from Citigroup Inc increased demand for equities.

The banking heavyweight’s profit topped estimates, even as it reached a $7 billion settlement with the U.S. Justice Department over shoddy mortgage-backed securities. Citigroup shares climbed 3%, lifting shares of other banks such as J.P. Morgan Chase & Co JPM -0.12%   and Goldman Sachs Group Inc. GS +0.33%

“This market has defied all odds and we are seeing a classic 18-month-long climb up the wall of worry, said Vince Lowry, CEO of RevenueShares.

“We expect the second half to be choppy and a 5-10% pullback would be healthy. However, the issue right now is that there are no sellers, as people do not want to miss out on the rally,” Lowry added.

The pace of the second-quarter earnings season will move into high gear this week with results due from large companies in the financial and technology sectors, the two largest sectors in the S&P 500 index.

Citigroup Inc. C +0.06% : The bank said it would pay $7 billion to settle claims regarding sales of mortgages before the financial crisis. The company also beat consensus forecasts for second-quarter earnings and revenues. Shares rose 3.2%.

The banking sector and “valuations are going to remain the main focus for this week, as we will get the earnings from some of the biggest tycoons of Wall Street,” said Naeem Aslam, chief market analyst at AvaTrade, in a note. “The expectations are high, and investors are hoping that these earnings will cement the optimism that growth is on track in the U.S. and that revenues are healthy.”

Monday lived up to its merger day status, with a flurry of companies announcing deals.

Apple Inc. AAPL +0.18% : shares rallied 1.7% after analysts at Barclays and Morgan Stanley lifted their target price on the stock to $110.

Tesla Motors Inc. TSLA +0.13% : China will require at least 30% of government vehicles to be electric , according to Barron’s.

Asian stocks overnight finished broadly higher, with Tokyo’s Nikkei Average JP:NIK +0.64% ending up by 0.9%. European stocks XX:SXXP +0.86%  rose for a second straight day on Monday as fears about the soundness of Portuguese banks continued to recede.