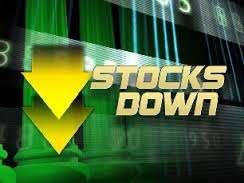 U.S. Stocks Slump Most Since June Amid Weak Factory Data

U.S. Stocks Slump Most Since June Amid Weak Factory Data

U.S. stocks fell, sending benchmark indexes to their biggest declines since June, as manufacturing in the world’s largest economy slowed more than estimated.

“Everyone walked in this year expecting a continuation of at least growing economic activity and the latest data we’ve been seeing throw a bit of cold water on that theory,” Bill Schultz, chief investment officer who oversees about $1.1 billion at McQueen Ball & Associates in Bethlehem, Pennsylvania, said by phone. “Economic activity was not as strong as people expected. People are taking a pause, reassessing where they stand.

The benchmark for American equities sank 3.6 percent in January, its worst opening month since 2010, as the gauge dropped in each of the month’s final three weeks, the longest streak since 2012. Stocks fell as the Federal Reserve trimmed its bond-buying program for the second time in as many months and emerging-market currencies tumbled amid signs growth was slowing in China. The country’s official Purchasing Managers’ Index decreased to a six-month low in January as output and orders slowed.

Data today showed factory activity in the U.S. expanded in January at the weakest pace in eight months as orders slumped, a sign manufacturing cooled at the start of the year along with the weather.

The Institute for Supply Management’s factory index decreased to 51.3 from 56.5 the prior month, the Tempe, Arizona-based group’s report showed. The median forecast of 85 economists surveyed by Bloomberg called for a decrease to 56. Readings above 50 indicate expansion.

Fed policy makers said on Jan. 29 that the central bank will trim its monthly bond purchases by $10 billion to $65 billion, cutting the pace of stimulus for a second straight meeting because of an improving economy.

Three rounds of Fed bond buying has helped drive the S&P 500 up 157 percent from a 12-year low in 2009 while pushing capital into emerging markets in search of higher returns.

“The market is adjusting to the Fed taking the punch bowl away,” Douglas Cote, chief market strategist at ING U.S. Investment Management in New York, in a telephone interview. His firm oversees about $200 billion. “The fundamentals remain solid. Even though we’re in the correction phase, ultimately the path for the market is up.”

Treasury Secretary Jacob J. Lew today said the U.S. risks breaching the federal debt limit by the end of this month and called on Congress to raise it immediately to sustain economic momentum. The debt ceiling was suspended through Feb. 7 under an agreement between President Barack Obama and congressional Republicans in October. The Treasury Department uses so-called extraordinary measures, or accounting maneuvers, stay under the ceiling.

Anadarko Petroleum Corp. and Yum! Brands Inc. are among 11 S&P 500 companies reporting earnings today. Profit at companies in the benchmark gauge probably increased by 8.3 percent in the fourth quarter of 2013 and their revenue by 2.5 percent, analysts’ estimates compiled by Bloomberg show.

The Chicago Board Options Exchange Volatility Index jumped 16 percent today to 21.44, the highest level since December 2012. The gauge of S&P 500 options known as the VIX is up 56 percent this year.

The Nasdaq Composite Index plunged 2.6 percent for its biggest decline since June 2012. TheRussell 2000 (RTY) Index slumped 3.2 percent for its steepest slide since April and the Dow Jones Transportation Average lost 3.2 percent to its lowest since November.

AT&T’s new offer cuts $40 a month from premium users’ bills. The move is an escalation of competition in the mobile market where AT&T and T-Mobile US Inc. have run back-and-forth attack ads and offered $450 in credit to entice customers to switch service providers.

Ford fell 2.7 percent to $14.55, the seventh drop in eight days that left the stock at its lowest level since May. GM slipped 2.3 percent to $35.25. The largest U.S. automakers reported wider declines in deliveries than analysts estimated as the coldest January in two decades kept some shoppers from dealerships. Sales of cars and light trucks fell 12 percent for GM and 7.5 percent for Ford, according to company statements.

Jos. A. Bank dropped 5 percent to $53.39. The retailer, which told Men’s Wearhouse Inc. it won’t enter buyout talks, has been looking at other acquisitions including retailer Eddie Bauer, people familiar with the matter said.

Pfizer Inc. added 0.7 percent to $30.60 for the only gain in the 30-stock Dow index. The world’s largest drugmaker said a phase 2 trial of palbociclib plus letrozole achieved its primary endpoint in treating post-menopausal women with advanced breast cancer.