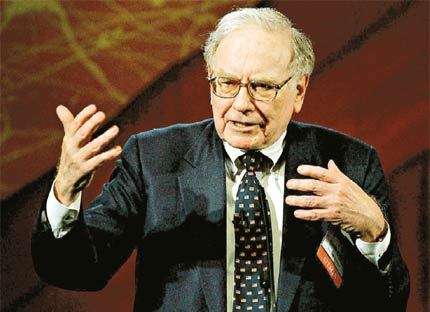 NEW YORK, March 1 (Reuters) – Warren Buffett  BRKa.N on Saturday signaled he plans to make more large acquisitions for Berkshire Hathaway Inc  BRKa.N to expand his conglomerate, which posted a record profit in 2013 with the help of a recovering U.S. economy.

“Charlie and I have always considered a ‘bet’ on ever-rising U.S. prosperity to be very close to a sure thing,” he added, referring to his 90-year-old vice chairman Charlie Munger. “Though we invest abroad as well, the mother lode of opportunity resides in America.”

The annual letter is widely read not just by Berkshire shareholders, but by investors and others looking for wisdom and guidance from the so-called Oracle of Omaha, the world’s fourth-richest person.

Buffett has run Berkshire since 1965, and the Omaha, Nebraska-based company now has more than 80 businesses in such areas as insurance, railroads, utilities and ice cream. It also owns more than $117.5 billion of stocks.

Buffett again signaled that he has no plans to leave his company soon, telling shareholders he intends in next year’s letter to review his first 50 years at Berkshire, and what the future may bring.

Berkshire’s book value per share, Buffett’s preferred yardstick for measuring net worth, grew 18.2 percent after taxes in 2013 to $134,973.

Despite that, the 2009-to-2013 period marked the first time since Buffett took over Berkshire that book value per share rose more slowly over five years than the Standard & Poor’s 500  .SPX including dividends on a pre-tax basis.

Berkshire’s per share net worth was up about 91 percent during that period, while the index gained about 128 percent.

Buffett said he remains on the prowl for more big acquisitions, which he calls “elephants,” after two recent big purchases: a $5.6 billion acquisition of Nevada utility NV Energy by Berkshire’s MidAmerican Energy unit, and a $12.25 billion investment in ketchup maker H.J. Heinz Co.

He said future purchases could follow the “partnership” structure he used when teaming up with Brazil’s 3G Capital to buy Heinz. Buffett also said Berkshire’s 50 percent Heinz stake could grow if 3G investors decide to sell their shares to him.

Berkshire ended last year with $48.19 billion of cash and equivalents, giving Buffett the freedom to make big acquisitions and retain a $20 billion cushion.

Munger told Reuters last year that Berkshire would be “stark raving mad” not to pursue another giant acquisition, but that it was difficult to do so because low interest rates had pushed up takeover prices. (Full Story)

Thomas Russo, a partner at Gardner Russo & Gardner in Lancaster, Pennsylvania, who oversees around $9 billion with about 11 percent of that in Berkshire, said Munger and Buffett have the luxury “to do nothing” until opportunities arise, which strengthens Berkshire’s strategy.

In the fourth quarter, Berkshire was a net seller of stock, selling $191 million more than it bought.

While Berkshire is known for its insurance businesses, Buffett has been acquiring businesses in other, sometimes boring sectors that are capable of steadily boosting revenue.

He said profit from a “Powerhouse Five” of large non-insurance unit — the BNSF railway, Iscar for metalworking, Lubrizol for chemicals, Marmon for industrial products, and MidAmerican Energy — might boost pre-tax profit in 2014 by $1 billion from the $10.8 billion they collected in 2013.

“I must again confess that their investments outperformed mine. (Charlie says I should add ‘by a lot.’),” Buffett said, referring again to Munger. “Their contributions are just beginning: Both men have Berkshire blood in their veins.”

Berkshire’s succession plan calls for Buffett’s responsibilities to be split in three after he leaves. Buffett’s son Howard would become non-executive chairman, and others would serve as chief executive officer and chief investment officer.

Buffett has not said who the candidates for the CEO position are, except that they all work at Berkshire and are men.

He also said Tad Montross, the head of the General Re reinsurance unit, has turned a business that Buffett once thought he had made a “huge mistake” in buying into a “gem.”