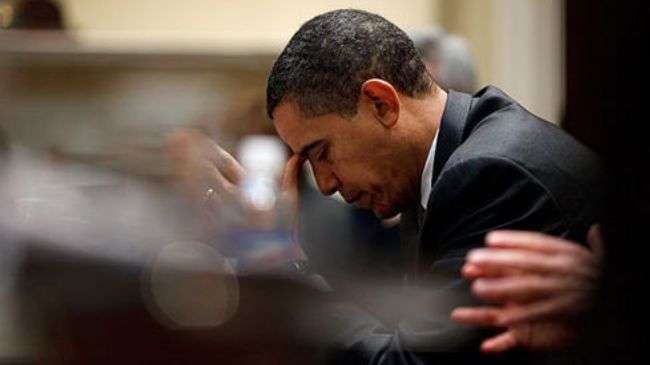 US President Barack Obama’s job approval rating hit a new low of 40 percent while an overwhelming majority of Americans are not satisfied with the state of the country, a new poll says.

The latest NBC News/Wall Street Journal poll showed on Tuesday 60 percent of respondents are dissatisfied with the state of the US economy.

According to the survey, more than 70 percent believe the United States is headed in the wrong direction, and 79 percent are down on the country’s political system, including nearly half who are very dissatisfied.

“We’re in the summer of our discontent,” Hart said. “Americans are cranky, unhappy… It is with everything going on the world.”

“People are continuing to tell us what ways [the Great Recession] is still impacting them today,” McInturff said. “Those stories are pretty grim.”

Seventy-one percent of Americans believe the economic problems are due to the inability of elected officials in Washington to get things done to improve the economy.

About Congress, 14 percent approve of the job it is doing and this is the seventh-straight NBC/WSJ poll dating back to 2011 when this rating has been below 15 percent.