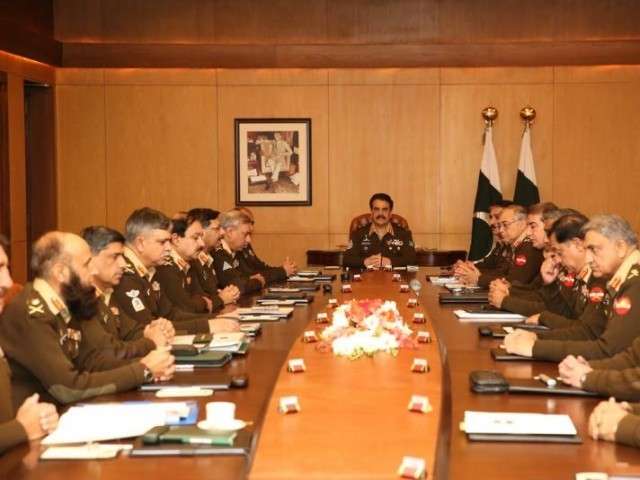 PAKISTAN ARMY SAYS MILITANTS WILL NOT REGROUP IN WAZIRISTAN

PAKISTAN ARMY SAYS MILITANTS WILL NOT REGROUP IN WAZIRISTAN

Pakistan’s top military commanders on Monday said that militants would not be allowed to ” regroup and return” in North Waziristan tribal region.

The security forces launched the much-anticipated major offensive against the Pakistani Taliban and their foreign guests following a deadlock in the peace talks.

The army says over 600 militants have been killed since the operation code-named “Zarb e Azb” started on June 15 with dozens of their hideouts destroyed.

Pakistan had been under pressure to go after the militants in North Waziristan, their biggest sanctuary for planing and training suicide bombers.

The region had also been the main focus of the U.S. drone strikes as American officials insisted militants use the region as a launching pad for cross-border attacks into Afghanistan.

The Corps Commanders met at a conference at the army’s headquarters in Rawalpindi and were given detailed briefing on the operation and the overall security situation, the army’s spokesman said.

“The participants vowed that terrorists will not be allowed to regroup and return to these areas, neither will they be allowed any space across the country,” a statement from the military’s Inter-Services Public Relations said.

The Army Chief, General Raheel Sharif, who president over the conference, expressed complete satisfaction over progress made in the Operation so far.

“The army chief paid rich tributes to the courage shown and sacrifices rendered by troops during the ongoing operation,” the statement said.

General Raheel emphasized on the need to consolidate operational gains made so far which he hoped will also be backed up by long term counter terrorism and counter extremism measures by the concerned stake holders.

The operation has uprooted nearly one million tribesmen and majority live in Bannu, a district near North Waziristan, and some other nearby cities. Several thousands have crossed into Afghanistan’s Khost and Paktika provinces.

The army chief directed all concerned authorities to assist Waziristan IDPs during their stay outside and in their early return to their homes.