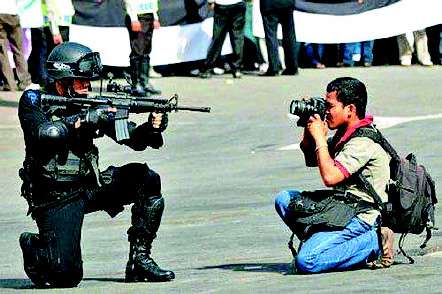 The report sheds light on the threat it says the country’s media faces, including from political parties, Islamist insurgents and its own intelligence agencies.

“A critical step will be for Pakistan to investigate its own military and intelligence agencies and ensure that those responsible for human rights violations against journalists are brought to justice,” said David Griffiths, Amnesty’s Deputy Asia Pacific Director.

“This will send a powerful signal to those who target journalists that they no longer have free reign.”

The Amnesty report came after a top political talk show host was shot and wounded in the city of Karachi earlier this month.

Hamid Mir survived the attack and his employer, the privately owned Geo News television channel, has since accused the military’s Inter-Services Intelligence (ISI) spy agency of orchestrating it. The army has denied the allegations and demanded that the channel be shut down.

Criticising the ISI or the army is taboo in Pakistan and the showdown between Geo and the military has sparked an unprecedented debate about press freedom in the country.

Weeks earlier, another TV anchor, Raza Rumi, was attacked in the city of Lahore. He has since fled to the United States.

Amnesty’s report is based on research into over 70 cases where journalists have been targeted for their reporting.

Amnesty said the pressure on journalists came from a range of organisations including the ISI and other intelligence agencies, as well as the Karachi-based Muttahida Qaumi Movement political party, the Pakistani Taliban and the sectarian militant outfit Lashkar-e-Jhangvi.

Despite the violence, Pakistani authorities have largely failed to hold perpetrators to account, Amnesty said.

Out of 74 cases looked into by Amnesty, authorities investigated only 34, while court proceedings were brought against alleged perpetrators in six cases. Perpetrators were convicted in two cases.

The U.S.-based Committee to Protect Journalists in 2014 ranked Pakistan as the fourth most dangerous country in the world for journalists. Reporters Without Borders placed it 158 out of 167 countries in its 2014 World Press Freedom Index.

“Journalists, in particular those covering national security issues or human rights, are targeted from all sides in a disturbing pattern of abuses carried out to silence their reporting,” Griffiths said