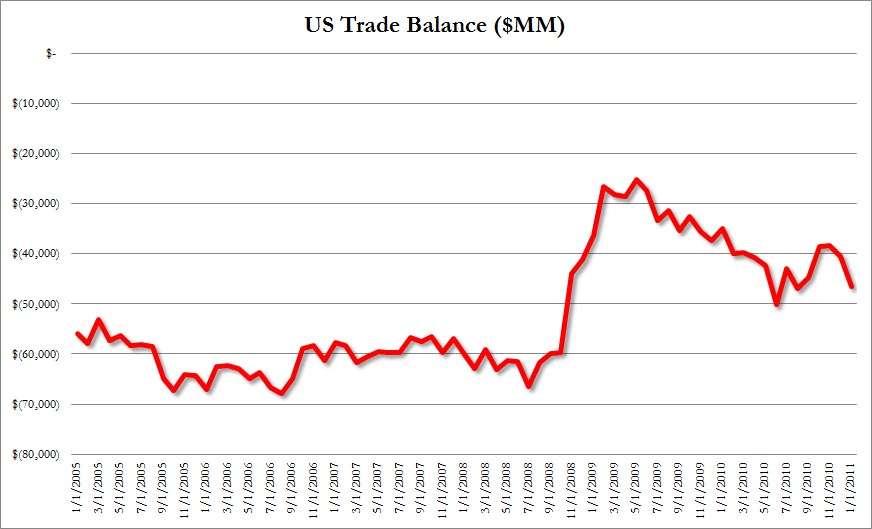 US trade deficit declines to $34.3b billion

US trade deficit declines to $34.3b billion

WASHINGTON: The US trade deficit fell in November to its lowest level in four years, an encouraging sign for economic growth. Gains in energy production and stronger sales of American-made airplanes, autos and machinery lifted exports to an all-time high.

The trade gap dropped 12.9 per cent in November to $34.3 billion, the Commerce Department said Tuesday. That’s the smallest monthly trade deficit since October 2009.

Exports rose 0.9 per cent to a record $194.9 billion, aided by a 5.6 per cent rise in petroleum exports. Imports dropped 1.4 per cent to $229.1 billion. A decrease in demand for foreign oil offset a record level of imported autos.

Through 11 months of 2013, the trade deficit is 12.3 per cent lower than the same period in 2012. Exports have strengthened, while imports are slightly lower.

A smaller trade deficit can boost economic growth. It typically shows that American companies are earning more from sales overseas, while US consumers are buying fewer products from foreign companies.

Economists said the narrower deficit should boost economic growth in the October-December quarter.

Jennifer Lee, senior economist at BMO Capital Markets, noted that the gap declined in both October and November.

She is currently forecasting growth at an annual rate of 2.4 per cent. But after the trade report she said growth could end up being stronger.

”Growth should get a lift from trade in Q4,” she said.

A domestic energy boom has boosted exports and lessened America’s dependence on foreign oil. US petroleum exports were up 10.8 per cent through the first 11 months of 2013 compared with the same period in 2012.

In that same period, petroleum imports have fallen 11.5 per cent.

The drop in oil imports has been helped by lower global prices. After peaking at $102 per barrel in September, the average price of a barrel of imported crude oil has fallen and averaged $94.69 a barrel in November.

Analysts are predicting the price of imported oil will decline further, noting ample supplies and a strengthening dollar

The deficit with the European Union dropped 29.4 per cent in November to $10.1 billion. That reflected a big drop in imports from that region, which offset a small dip in US sales to Europe.

The overall economy grew at an annual rate of 4.1 per cent in the July-September quarter. Much of that strength reflected a buildup in business stockpiles.

Economists believe inventory building slowed in the October-December quarter, which could dampen growth.

Still, other data have been encouraging. The rise in exports has lifted factory output. And a stronger job market has made Americans more confident in the economy and led to more spending.

Those factors could offset some of the drag from lower inventory growth.

Many analysts are forecasting economic growth in the fourth quarter at an annual rate of around 2.5 per cent. And they expect growth will accelerate in 2014, helped by further gains in exports, more job growth and less drag from the federal government.