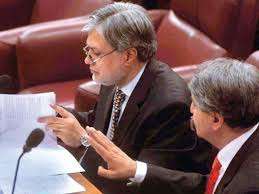 (i) It has been said that tax has been levied on the Manufacturers of Cooking Oil and Vegetable at the rate of 2% on purchase of locally produced edible oil. In fact this mode of taxation has been provided in clause (13C) of Part-II of second schedule of Income Tax Ordinance, 2001 at the current rates since 2005. However, it was observed by certain courts that this was not proper place for placing such a provision and accordingly the provision has been transposed from the said clause to newly inserted Section 148A. There has been no change in law, taxation or tax rate of any kind. It is merely a technical correction and no change has been made in the tax rates.

(i) Sales Tax on Poultry & Cattle Feed and their ingredients. It was proposed that exemption in respect of import and supply of Poultry feed, cattle feed and their ingredients except soya bean meal may be withdrawn and sales tax at the rate of 5% may be imposed instead. However, after consultations with the poultry association and considering their grievances and likely impact on prices of poultry, it has been decided that sales tax exemption in respect of local supply of poultry feed and cattle feed may be continued, whereas, import and supply of their ingredients except soya bean meal may be subjected to 5% sales tax. The Poultry Association has in turn assured us that the price of poultry shall be accordingly reduced.

(ii) FED on Aerated Water. Rate of Federal Excise duty on aerated waters was proposed to be revised upwards from 9% to 12%. However, after consultation with the beverages industry it has been decided to lower the proposed rate of 12% to 10.5%. In this way there will be no impact for the consumer.

(v) Extension in period of tax credit for BMR. Similarly, under section 65B of Income Tax Ordinance, tax Credit is allowable for extension, expansion, balancing, modernization and replacement of the plant and machinery in an industrial undertaking for machinery installed up to 30th day of June, 2015. On request of various industry bodies, this date is proposed to be extended up to 30th June 2016 so as to further incentivize industrialization.

(vii) Tax on undistributed reserves. Tax on undistributed reserves has been proposed in the Finance Bill to encourage payment of dividend which would bring more investors to the stock exchange. However, certain companies have huge reserves and it is not possible for them to distribute those reserves immediately. Such companies will be facilitated by providing an option to them to instead distribute at least 40% of the profits or 50% of its paid up capital.

(viii) Constitution of special regime for Haj Operators. A simplified system of tax was introduced for Hajj Group Operators through Finance Act 2013 for Tax Year 2013 and 2014 to exempt them from certain requirements of Income Tax Ordinance which they were finding hard to fulfill. This is proposed to be extended to Tax Year 2015.

(ix) Relief for tax compliant media. Payments for advertising services to electronic and print media are exempt from withholding tax on services. It has been proposed through the Finance Bill that exemption from withholding tax on payments to electronic and print media in respect of the advertising services may be withdrawn. Several representation have been received that this would be burdensome for taxpayers who will be constrained to approach the department for refund of the excess deductions. We have decided that we will not provide any relief to persons who do not file Income Tax Returns and they will have to pay tax at the higher rate of 12% in the case of companies and 15% for others. Full exemption will not be granted in case of persons who file tax returns as well. In order to ensure documentation and collect record of their transactions, they will still be subject to reduced rate of withholding tax on services of 1% which is also the rate of minimum tax payable on their turnover, thus not resulting in creation of any refunds to be paid to them.

(x) Extension in period for setting up of halal meat plants. In order to encourage new investments in the halal meat production and to increase the use of modern and state-of-the-art machinery and equipment in this sector, exemption from Income Tax for four years was proposed to be granted to companies which set up ‘halal’ meat production plants and obtain ‘halal’ certification by 31st December 2016 in the finance bill. This incentive has generated great interest, however we have also received representations that the time allowed for setting up a new industry is too short. Therefore, we are now proposing that the time allowed for setting up a new unit may be extended to 30th June, 2017.

(xi) Tax on commodity transactions of mercantile exchanges. In order to bring Capital gains derived from trading of commodity future contracts on Pakistan Mercantile Exchange in to the tax net was proposed in the finance bill that an advance adjustable income tax at the rate of 0.1% on each transaction may be introduced to be collected on every purchase and sale of futures contract. This would have meant a tax incidence of 5-7%. On representation of Pakistan Mercantile Exchange and business community, it proposed to reduce the rate of this tax to 0.05%.

(xii) Fixation of minimum limit for tax on bank transactions for non-filers. In order to encourage the undocumented sector of the economy to come in to tax net and comply with tax laws, it was proposed that adjustable advance income tax at the rate of 0.6% of the amount of transaction may be collected on all banking instruments and other modes of transfer of funds through banks, in the case of persons who do not file Income Tax returns. This provision is not to be applied on taxpayers. However, senate has recommended that, there should be a threshold below which this tax should not be collected. In order to prevent hardship in case of small transactions, transactions below Rs. 50,000 per day shall be exempt from deduction under this head.

The government has focused on providing incentives for economic development of the remote and underdeveloped areas. In the Finance Act 2014, exemption was granted to income from a fruit processing or preservation unit set up in Balochistan Province, between the first day of July, 2014 to the thirtieth day of June, 2017, engaged in processing of locally grown fruits for a period of five years.

In order to encourage high tech and high value addition industries in Pakistan, the following incentives are proposed:

At the time of presentation of the Budget a comprehensive package was announced for agriculture which has generally been appreciated. However, Parliamentarians and farmer representative organizations have made some additional suggestions. These have been given due consideration and it has been decided that:

It was announced that the upper limit for investment in Bahbood Saving Scheme was being increased from Rs 3 million to Rs 4 million. It is clarified hat this increase in limit will also be applicable on Pensioners’ Benefit Account Scheme.

The increase in salary was announced keeping in view inflation. The Committee comprising representatives of Finance Division and Establishment Division had proposed an increase of only 5%. However, we increased salaries by 7.5%. In view of the discussion on the topic, the Government has decided that this increase will be given after merger of Adhoc Relief Allowances of 2011 and 2012 in the salary. As a result of this review, the increase in salary will be almost 11%.