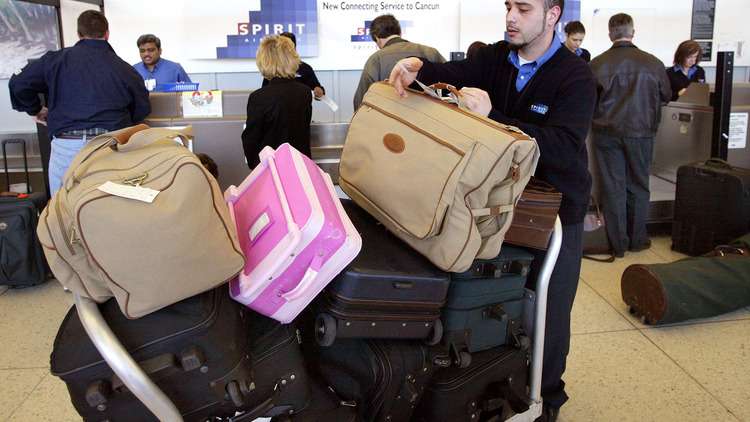 Some airlines are raising baggage fees for the Holidays

Jammed airports, jammed airplanes, and now a heftier fee for bringing a bag, too.

Joining its low-cost peer Spirit, Frontier Airlines said this week it will increase baggage fees by $5 to $10 during peak travel periods. The extra hit at Frontier will run from Nov. 19 to Jan. 5, 2016, along with two other periods in 2016 coinciding with the throngs of spring and summer travelers.

Horrified? Irritated? During peak times, airlines are full, and some won’t mind if you’re piqued about being pinched a bit more. Regardless of an extra $2 or $10, you’ll travel anyway. The U.S. airlines’ trade group said on Thursday that the industry expects 25.3 million air passengers during the 12-day Thanksgiving travel period, the most since 2007.

At peak travel times, Spirit and Frontier, which operate with a low-fare, high-fee business model, are betting their total trip prices will win over plenty of people who suffer sticker shock when they see airfares offered by the major airlines.

On Friday, U.S. Senator Bill Nelson, a Florida Democrat, said he had written to major airline CEOs to ask them not to charge more for bags during the holidays. “These increased surcharges fly in the face of declining fuel costs and appear focused on increasing profitability on the backs of American families,” wrote Nelson, who has previously criticized airlines’ bag fee policies.

Frontier’s peak travel pricing has been mischaracterized and is actually the airline’s normal baggage fee, President Barry Biffle said in an interview. The fees at other times represent “value season pricing,” he said.

“This idea that Frontier is actually ripping people off at the holidays—nothing could be further from the truth,” Biffle said, arguing that Frontier’s total trip cost is far less than that of most airlines. “We encourage consumers to look at the total price—that’s all that matters.”

Jay Sorensen, a former airline executive who now runs a consulting firm, called Nelson’s request “absurd.” “It’s classic supply-and-demand pricing,” Sorensen said. “When it’s peak demand, a company has the right to charge more. Yes, if someone is really upset with bag fees, then you should go with Southwest.”

The legacy airlines don’t charge higher baggage fees at peak travel times. That said, the industry is experimenting with ways to dynamically price unbundled products and services. That means charging more for an aisle seat assignment or a row with extra space on busy Friday evening flights, compared with a lighter load on a Tuesday.

At Frontier, both checked and carry-on bags will cost an extra $5 if paid for at least 24 hours before departure. Bag fees paid at the time of check-in or via telephone will cost $10 extra. At other times, the Denver-based airline charges $25 for a checked bag and $30 for one brought into the cabin. The higher holiday fees could also drive some customers to a product Frontier introduced this summer called “The Works.” That bundle, which begins at $49, depending on destination, allows for a checked and carry-on bag, a seat assignment, priority boarding, and a ticket that’s refundable and changeable.

Spirit is charging an extra $2 for bags during the Thanksgiving and Christmas travel period. Spirit spokesman Paul Berry said passengers check more bags during peak travel times, which increases costs. The total price of a trip on Spirit is more than 30 percent lower on average than other airlines, even with higher holiday bag fees, he said. “There is no added baggage charge if the customer doesn’t check a bag,” Berry said in an email. “This is a much more fair and transparent approach for consumers.”

Yasufumi Saito contributed to this story.