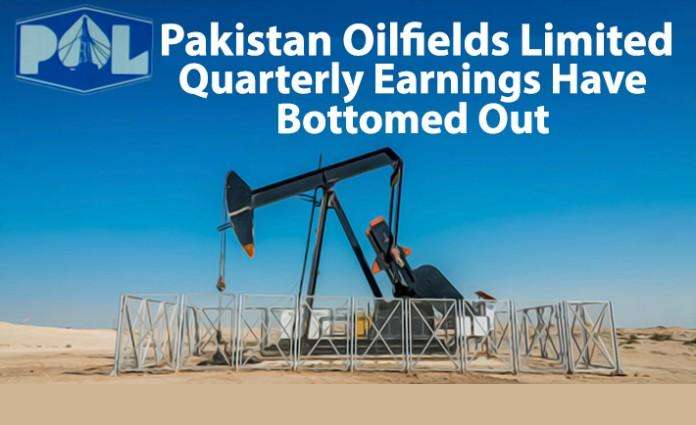 We initiate coverage on Pakistan Oilfields Limited (POL) with a Buy rating and June’16 Target Price of PKR460/share, offering an upside of 53% to the last close.

After posting dismal FY15 and especially 4Q results, we believe that quarterly earnings of POL have bottomed out and bare poised to grow in FY16, especially during 2H, after hydrocarbon production addition mainly from TAL Block.

Though average crude oil prices are further expected to decline by around 30% in FY16, versus the previous year, the decline in POL earnings would however be marginal, around 5-7%.

We also review the FY15 annual result of the company in which POL reported after tax profit of PKR8.5bn, (EPS of PKR35.76, down considerably by 34% YoY). Earnings during 4Q stood at PKR1.1bn (EPS: 4.62), down significantly by 61% on a YoY basis. POL also announced final cash dividend of PKR25.0/share, in addition to interim cash dividend of PKR15.0/share, taking full year payout to PKR40.0/share.

Top line of POL displayed 13% contraction during FY15 on a YoY basis. Though LPG sales were up considerably by 38% YoY, led by 69% YoY growth in LPG production that averaged 134 MTPD, both oil and gas based revenues were down during FY15 which constitutes more than 80% of revenues of the company.

Crude oil revenues contracted by 24% on a YoY basis, despite 6% YoY growth in oil production that averaged 6.3k bopd compared to 5.95k bopd during the previous year, while gas based revenues were also down by 13% on a YoY basis. Decline in oil based revenues was mainly due to lower realized crude oil prices that clocked in at USD70/bbl, down from USD86/bbl a year ago. The reduction in gas revenues was on account of both 9% decline in gas production that averaged 71mmcfd vis-a-vis 78mmcfd in SPLY and also due to 5% YoY decline in realized well head gas prices.

Despite severe drop in crude oil prices, field and prospecting costs of POL remained downward sticky during FY15. Though amortization of development and decommissioning costs slumped considerably by 42% during FY15 due to high base effect (POL charged significant amortization costs pertaining to Domial in FY14), dry holes took a toll on profitability of the company this time around. POL booked dry wells costingPKR4.49bn (per share impact of PKR19 before tax) during FY15, which pertained to unsuccessful efforts at Pindori, Ikhlas and Malgin. As a result, field costs grew by 14% denting operating profit of POL by 34% on a YoY basis during FY15. Other

Income remained muted declining by 14% YoY owing to 55% YoY decline in dividend income from its associate companies (mainly NRL and APL), exchange gain and gas processing fee. On the other hand, operating cash flows of the company remained robust, as POL generated impressive per share OCF of PKR55.1, which also reflected favorably in the final cash payout.

Depressed crude oil prices to mire FY16 earnings, however improved hydrocarbon flows remain a key potential: Stock price performance of POL has come under a lot of duress in recent months that has closely tracked crude oil prices prevailing in the international market. Though volatility in oil has increased significantly in recent period, oil prices continue to remain depressed. We have assumed crude oil prices of USD50/bbl during FY16, which assumes further declineIn average oil price by around 31% on a yearly basis. With modest 6-8% improvement in hydrocarbon production, earnings of POL are expected to remain muted in FY16 as well. However, investors can draw comfort from the fact that the scrip is trading at an implied oil price of around USD35/bbl considerably below the current prevailing crude oil prices.

We initiate our coverage on POL with a Buy stance and June’16 PT (based on reserves based DCF) of PKR460/share. The stock offers an upside potential of 53% to last close and an impressive forward FY16E dividend yield of 10.7%. The scrip is trading at FY16 PE and PB of 8.9x and 2.3x, respectively.