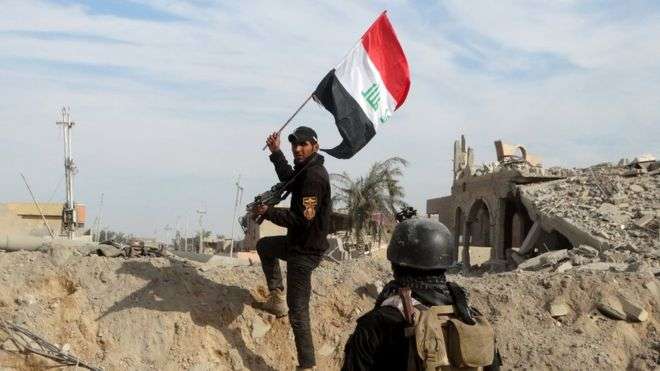 Iraq’s army said on Sunday it had defeated the militant Islamic State (IS) group’s fighters in a provincial capital, the first major victory for the US-trained force since it collapsed in the face of an assault by the militants 18 months ago.

Victory in Ramadi, capital of Anbar province, deprives IS militants of their biggest prize of this year. They captured the city in May.

After encircling the city for weeks, the military launched a campaign to retake it last week, and made a final push to seize the central administration complex on Sunday.

“By controlling the complex this means that we have defeated them in Ramadi,” Sabah al Numani, a spokesman for the government forces, said.

“The next step is to clear pockets that could exist here or there in the city.”

State television broadcast footage of troops, Humvee vehicles and tanks advancing through Ramadi streets amid piles of rubble and collapsed houses. Some districts appeared to have been destroyed by the advance.

Television also showed night-time celebrations in cities south of Baghdad with people dancing in the streets and waving Iraqi flags from cars.

The government says most civilian residents of the city were able to evacuate before it launched its assault.

Ramadi was recaptured by the army without relying on militias to avoid sectarian tensions with the population.

“The complex is under our complete control. There is no presence whatsoever of Daesh (IS) fighters in the complex,” Mr Numani told Reuters.

The government said its next target would be the northern city of Mosul, the largest population centre controlled by the IS in either Iraq or Syria.

“The smooth victory in Ramadi should be happy news for the residents of Mosul,” the spokesman said.