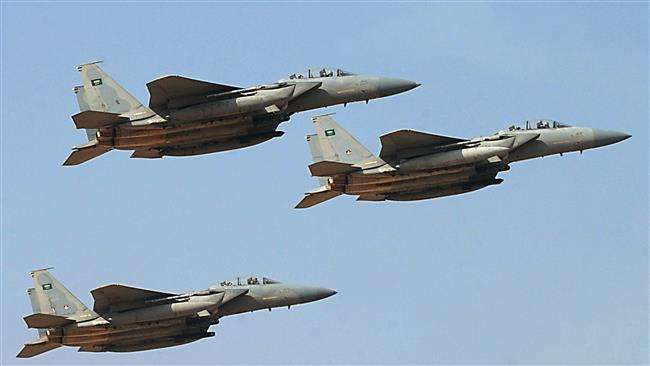 Saudi-led warplanes continue carrying out airstrikes against Yemen as the war on the impoverished country enters its fourth day.As night fell on Saturday, the aerial attacks resumed for a fourth night, residents of Yemen’s capital of Sana’a said.

Saudi-led fighter jets have pounded the northwestern city of Sa’ada. No casualties have been reported yet.

The city is the stronghold of Ansarullah fighters, against whom the warfare has been waged.

Dozens of people, including women and children, have been killed since early Thursday, when Saudi Arabia began the invasion of Yemen.

On Saturday, the United Nations said most of its 100 international staff were evacuated from Sana’a.

UN Secretary General Ban Ki-moon said on the same day that negotiations “remain the only chance to prevent long, drawn-out conflict” in Yemen. There was no sign of condemnation of the Saudi invasion in the UN chief’s remarks.

Riyadh says it has launched the airstrikes to defend the “legitimate government” of Hadi upon his request.

Ali Abdullah Saleh, Yemen’s former dictator who stepped down in 2012 after a year-long popular uprising, has likewise said the Saudi-led attacks aim to save the fugitive president.

In a televised speech on Saturday, Saleh urged the Arab League to help end the crisis “peacefully,” saying the “problem will not be solved with strikes.”

Also on Saturday, a senior Yemeni health official said at least 61 people had been killed in three days of fighting between Ansarullah fighters and loyalist militia in Yemen’s main southern city of Aden.

The situation has become increasingly tense in Aden, with supporters of Houthi fighters clashing with “popular committees” — an anti-Houthi militia controlling parts of the city