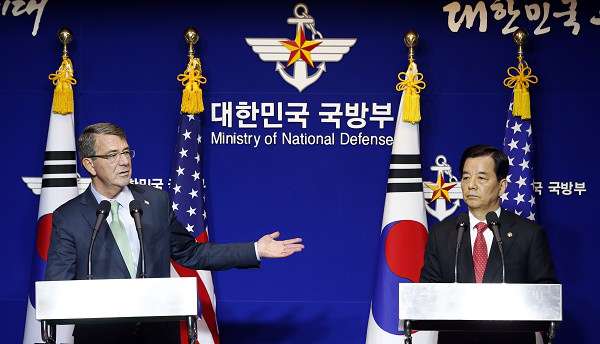 SEOUL: US Defence Secretary Ashton Carter and his South Korean counterpart vowed zero tolerance Monday in the face of any North Korean provocations and agreed to strengthen combined defences against the myriad threats posed by Pyongyang.

Carter met with Han Min-Koo in Seoul during an annual security meeting for the two allies to assess their ongoing military cooperation.

Carter told reporters that the two officials “spoke candidly” about nuclear weapons, ballistic missiles, cyber, and conventional military threats from North Korea, which they described as a risk to peace and security well beyond the Korean peninsula.

“The minister and the secretary reaffirmed that any North Korean aggression or military provocation is not to be tolerated,” according to a joint statement released after their talks.

They specifically voiced “grave concern” over strong hints from North Korea that it is prepping a long-range rocket launch in violation of US resolutions.

In a widely expected move, the defence chiefs signed an important agreement that defines conditions for a transfer of control of the South Korean military from the United States to Seoul in a time of war.

South Korea had been scheduled to take wartime control, known as OPCON, by the end of next year, but now the transfer is based on conditions being met and not a particular timeline.

North Korea’s hostile rhetoric, rocket tests and unpredictable behaviour in recent years has prompted calls to put off the transfer. The two nations agreed in principle to this “conditions-based” approach last year.