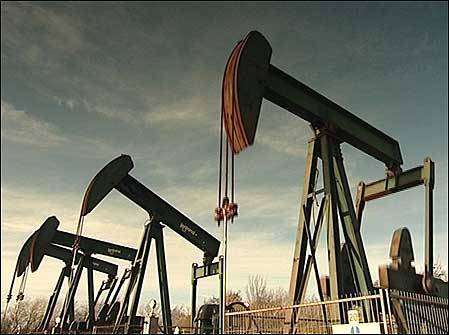 Fooled by oil’s false bottom, most US shale firms skipped hedging in Q4

Fooled by oil’s false bottom, most US shale firms skipped hedging in Q4

NEW YORK, March 16 (Reuters) – Last October, as U.S. oil prices seemed to be stabilizing around $45 a barrel, some bullish traders chuckled at the notion of U.S. shale firms racing to hedge production at what they thought was the bottom of a 19-month rout.

Now, a handful of producers, such as Anadarko Petroleum APC.N, which sporadically hedges in large chunks every few quarters, and, surprisingly, natural gas giant Chesapeake Energy CHK.N, may have the last laugh.

They were among the few to increase hedging in the fourth quarter, according to a Reuters analysis of filings from the largest shale firms. That group locked in prices for nearly 38 million barrels of future production just before crude tumbled a further $15 a barrel in the early weeks of 2016.

However, the figures show that, taken together, the 28 analyzed companies ended the quarter with some 28 million fewer hedged barrels, totaling 291 million, than when they started. Analysts estimate that between 15 and 20 percent of 2016 U.S. oil production is hedged, and as little as 2 percent for 2017.

In addition, at the end of 2015, some 44 percent of the group’s outstanding hedge book was concentrated in the hands of just eight U.S. shale oil companies that increased their outstanding oil options, swaps or other hedging positions.

In the third quarter, amid an almost uninterrupted decline in prices, only six companies had boosted their hedge positions.

The data underscores a growing chasm between those that remain hedged and producers that lack such protection, raising doubts how long the latter can survive the lower-for-longer price scenario.

“The path higher for prices will be fairly slow and steady because once we get back to the $45-$50 range, you’ll hit a wall of financial hedges that will cap prices,” said Michael Tran, director of commodity strategy at RBC Capital Markets, who expects the market to rebalance in the second half of the year.

In all, 16 companies ended the quarter with hedging positions reduced by a total 66 million barrels, mostly as a result of expiring hedges – a long-anticipated trend that leaves most of the industry with little insurance to ride out a market expected to trade below $40 a barrel through the year.

Foremost among those opting out of further hedges was Devon Energy DVN.N, which let insurance on some 14 million barrels expire in the fourth quarter. Last month, Devon said that it would slash its dividend and capital spending by 75 percent and lay off a fifth of its staff. (Full Story)

Analysts who track shale producers say sufficient cash flow that hedging can provide is key to a company’s health and ability to sustain production, yet most producers chose not to do so.

For cash-strapped drillers, hedging may have simply become too expensive, analysts say. Some producers also seem perpetually bullish and have passed up opportunities to hedge even at $20 or $30 above spot prices in recent quarters, betting prices will soon recover.

Now, analysts say those producers may need to rethink their strategies.

“We’re seeing sharp cuts from some producers this year in both cash and budgets,” said John Saucer, an analyst at Mobius Risk Group in Houston. “At the end of the day, the lack of hedging has come back to get them.”

Despite oil prices bouncing to nearly $40 this past week, some traders say ballooning inventories suggest further declines ahead.

In a note on Friday, Goldman Sachs cut its 2016 price forecast by $7 to $38 a barrel, adding that the recent rally would prove “self-defeating” as sustained low prices are necessary to finish supply-demand rebalancing. (Full Story)

The problem is that decade-low prices mean some producers simply cannot afford to hedge because the prices remain below marginal costs.

In a recent conference call, Anadarko’s chief executive told analysts he did not think “any company has got a motivation to hedge” at $30 oil.

Anadarko hedged additional 20 million barrels last quarter, which accounts for about 11 percent of its 2016 book.

In November, Continental Resources CLR.N – which sold off all its hedges in 2014 – said last month it expected to cut output this year by 10 percent.

Last month, Whiting Petroleum WLL.N – which let nearly 6 million barrels expire last quarter – said it would suspend all fracking and spend 80 percent less in 2016. The North Dakota oil producer has 20 million barrels hedged for 2016, which accounts for around 8 percent of output.

To be sure, not all producers hedge voluntarily. Dealers indicated a large number of hedges in recent weeks and months have been prompted by banks that require borrowers to hedge a certain part of production for upcoming quarters.