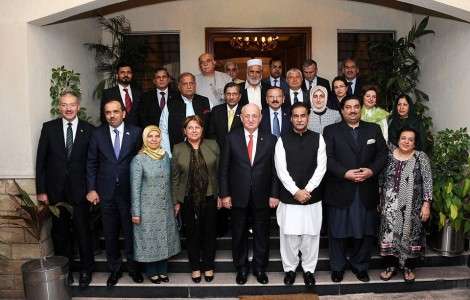 Finance Minister Senator Mohammad Ishaq Dar received a delegation of the Indonesian State Audit Board (SAB) which was led by the Board Chairman, Harry Azhar Azis, at the Ministry of Finance, today.

The Finance Minister stated that office of Auditor General of Pakistan has a key role in ensuring transparency, fair play and good governance. He said that the Constitution of Pakistan has granted the necessary powers to the office of Auditor General so that it can effectively perform its oversight functions. He said the present government believes in the principles of transparency and accountability in financial management and fully supports the role of the Auditor General to ensure that these principles are followed in practice. He said quality audit and financial discipline can help achieve the goal of good governance.

Mr. Azis briefed the Minister about the composition and working of the State Audit Board of Indonesia. He stated that the Board also enjoyed wide powers, similar to the Auditor General of Pakistan. He proposed enhanced cooperation and knowledge sharing between the Audit institutions of the two countries.

The Minister assured the visiting delegation that the government will fully support the initiatives of the two Audit institutions for enhancing bilateral cooperation in the field of Audit with a view to learn and benefit from each other’s experience.

Minister Dar stated that both Pakistan and Indonesia could make joint efforts to enhance cooperation among Muslim countries in the field of audit, accounts and financial management. Chairman SAB welcomed the proposal. Both agreed that such cooperation could be pursued through the forum of OIC.

Auditor General of Pakistan, Rana Assad Amin, senior officials of the Ministry of Finance and AGP office were present on the occasion