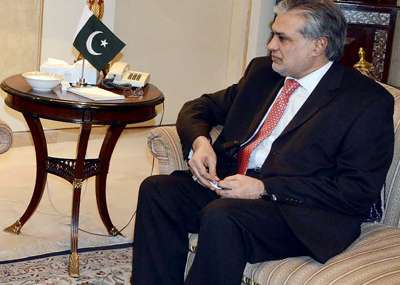 Mr. Ahmed Al-Khateeb, Minister and Advisor, Saudi Royal Court called on the Finance Minister Senator Mohammad Ishaq Dar here on Thursday and conveyed to the Minister a message of goodwill from the Saudi leadership.Finance Minister while welcoming the visiting Saudi dignitary said both the countries are bound by common faith and Islamic brotherhood and enjoy the best of relations. He said the present government led by Prime Minister Mohammad Nawaz Sharif wishes to further consolidate the brotherly relations and take them to further heights.

Finance  Minister exchanged views with the Saudi Advisor on ideas to  further expand trade and economic cooperation between the two countries. He apprised the Saudi dignitary of investment opportunities in Pakistan, particularly in the energy and petrochemical sectors and suggested that the Saudi government may encourage Saudi investors and public sector organisations to explore these opportunities. He said that the improved economic and security situation and implementation of government’s infrastructure related plans is attracting the attention of foreign investors.  Finance Minister said that Pakistan offers the most liberal investment regime and Saudi investors are most welcome to take advantage of it for mutual benefit of the two countries. Mr. Ahmed Al-Khateeb expressed the desire of the Saudi leadership for increasing the efforts to enhance economic cooperation to reflect the same proximity as the two countries enjoy in bilateral relations in general. He said that Saudi government would encourage companies to explore investment opportunities in Pakistan.The Minister thanked Mr. Al Khateeb for his visit and asked him to convey his best wishes and respects to Khadim al Haramain Shareefain and the Saudi leadership.