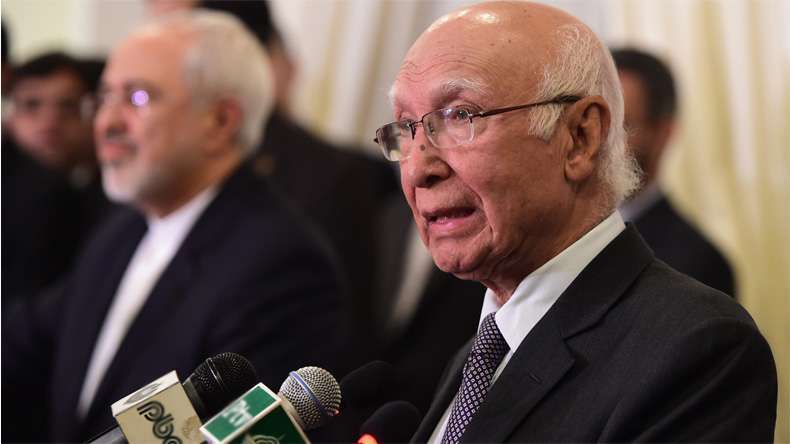 National Security Advisers (NSAs) of Pakistan and India have agreed to reduce tensions on Line of Control (LoC) after the recent escalations between the two countries, said Prime Minister’s Adviser on Foreign Affairs Sataj Aziz. According to reports, Aziz said that a contact was established between Prime Minister’s Adviser on National Security Lieutenant General Nasir Janjua ((Retd)) with his Indian counterpart Ajit Doval to discuss the situation following escalation of tensions between the two countries.

Aziz said the two NSAs agreed to reduce tensions on the LoC following a series of violations of the 2003 ceasefire agreement between the two countries. “Both NSAs stressed on the need to establish contact to reduce tensions along the Line of Control,” Aziz. He said that Pakistan wants to reduce tensions on the LoC and focus on the situation in the Indian held Kashmir, adding India wants to divert world’s attention from occupied Kashmir by escalating tensions on the LoC. Stressing a resolution of the Kashmir dispute, he recalled that Prime Minister Nawaz Sharif during his recent speech at UN General Assembly had indicated quite clearly that tensions will remain continue until just resolution of the Kashmir issue which is a longstanding dispute between the two neighbours.

Tension escalated between the two countries following India claimed conducting “surgical strikes” on Pakistan side of the LoC against the “terrorists” but Pakistan categorically rejected the claims and stated that it was just continuation of a pattern of ceasefire violations committed by the Indian forces.