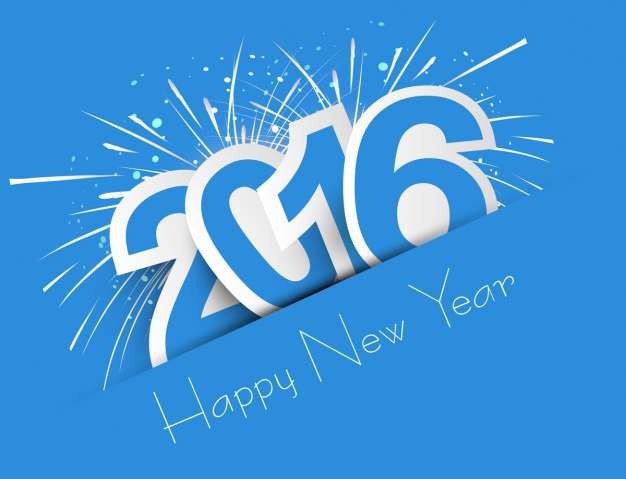 New Year’s celebrated around the World

New Year’s Eve celebrations rolled on around the world, despite heightened fears of of terrorist attacks.

As 2015 drew to a close, many people were bidding a weary and wary adieu to a year marred by attacks that left nations reeling and nerves rattled.

In Bangkok, site of a deadly bombing months ago, police flanked partygoers. In Paris, residents recovering from their city’s own deadly attacks enjoyed scaled-back celebrations. And in Munich, police warned of the threat of a terror attack.

But in other spots across the planet, revellers welcomed in 2016.

A look at how people around the welcomed the new year:

Paris, still recovering from the deadly Nov. 13 attacks, cancelled its usual fireworks display in favour of a five-minute video performance at the Arc de Triomphe just before midnight, relayed on screens along the Champs Elysee. 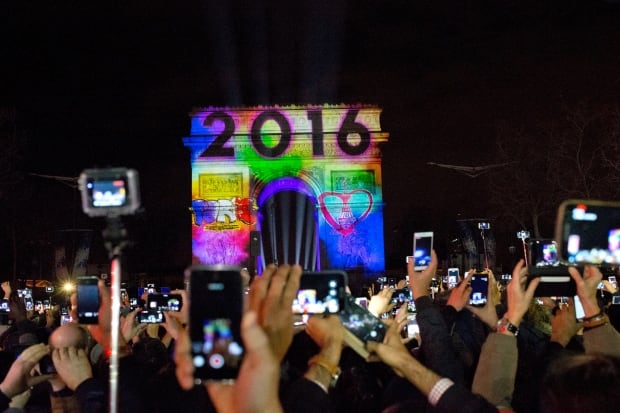 Paris, still recovering from the deadly Nov. 13 attacks, cancelled its usual fireworks display in favour of a five-minute video performance at the Arc de Triomphe just before midnight, relayed on screens along the Champs Elysee. (Francois Mori/Associated Press)

Fireworks lit up the sky above the Brandenburg Gate shortly after midnight in Berlin. 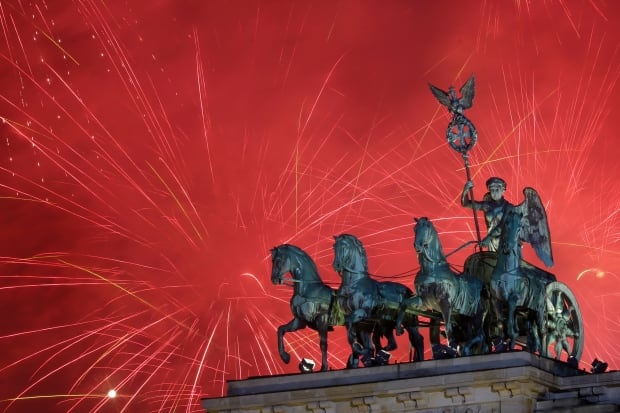 Hundred of thousands of people gathered for the New Year celebrations, welcoming the new year 2016 at the area around the Brandenburg Gate in the capital of Germany. (Markus Schreiber/Associated Press)

The Giza Pyramids near Cairo was the site of New Year’s Eve celebrations. 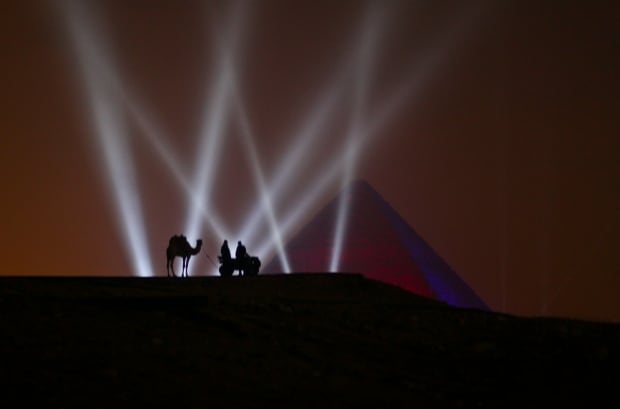 Two Egyptian men and a camel stand on a hill overlooking one of the Giza Pyramids during a New Year’s Eve fireworks display near Cairo, Egypt at midnight. (Maya Alleruzzo/Associated Press)

Tokyo rang in the new year 14 hours ahead of the eastern time zone. 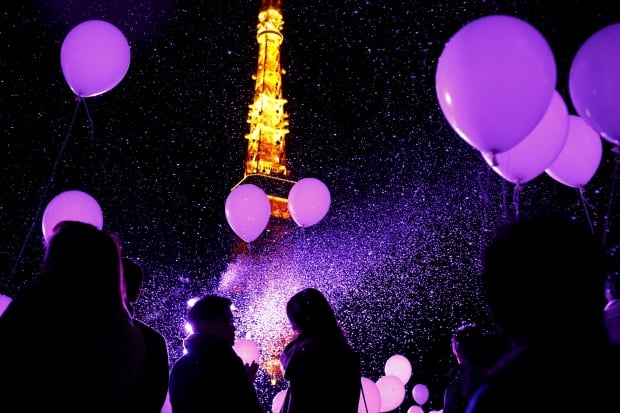 People hold balloons to release them at the turn of the New Year at a hotel in front of the landmark Tokyo Tower in Japan. (Thomas Peter/Reuters)

People left messages and wishes for the new year at Tokyo’s Meiji Shrine earlier in the day. 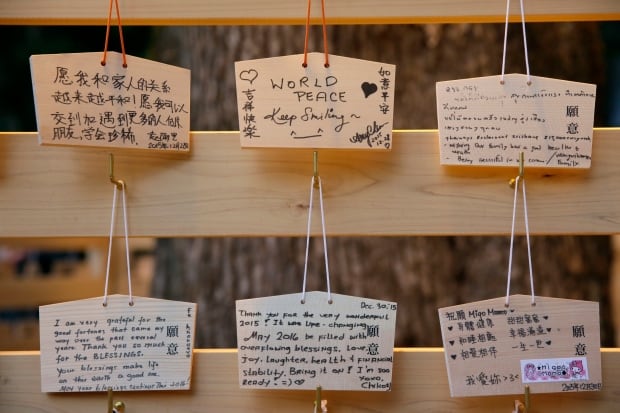 Wooden plaques with wishes written on them are hung at Meiji Shrine in Tokyo on Dec. 31, 2015. More than three million people visit the Meiji Shrine during the first three days of the New Year, to pray for their health, economic fortune and other wishes. (Kimimasa Mayama/EPA)

Beijing celebrated the Gregorian calendar’s new year ahead of Chinese New Year, which comes on Feb. 8. 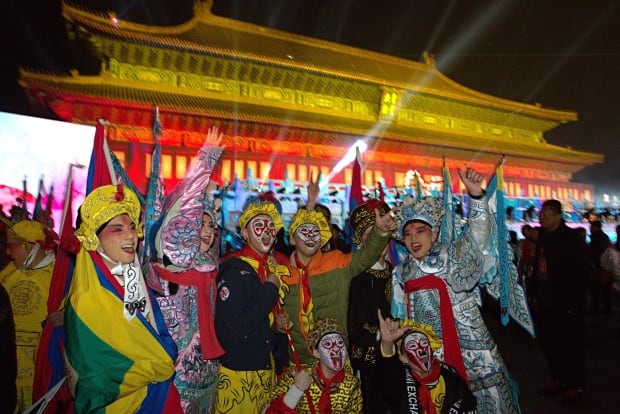 Performers pose for photos before the countdown to the New Year at an event in Beijing, China. (Ng Han Guan/The Associated Press)

Singapore shot fireworks into the sky over Marina Bay. 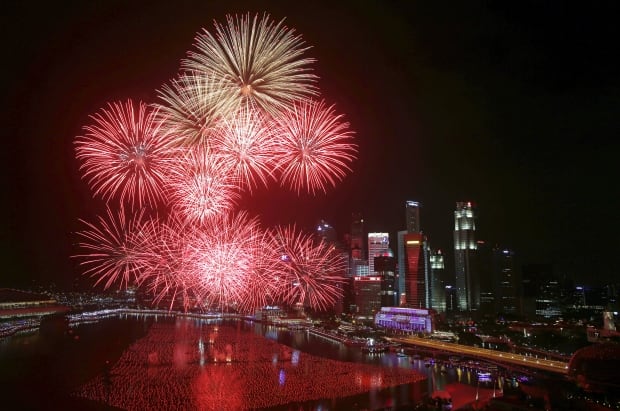 Fireworks explode in Marina Bay against the skyline of Singapore during New Year’s celebrations. (Edgar Su/Reuters)

Sydney, Australia, celebrated with fireworks over the Opera House. 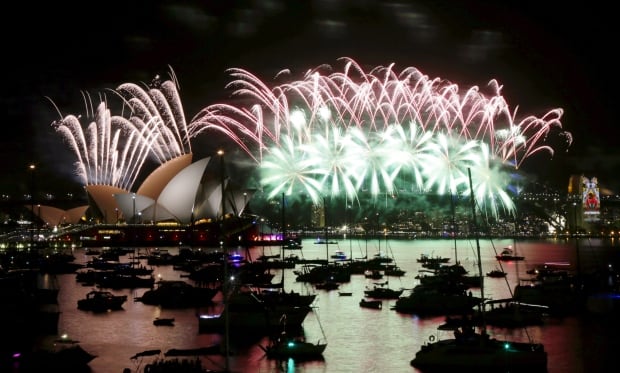 Taiwan’s Taipei 101 tower before the fireworks … 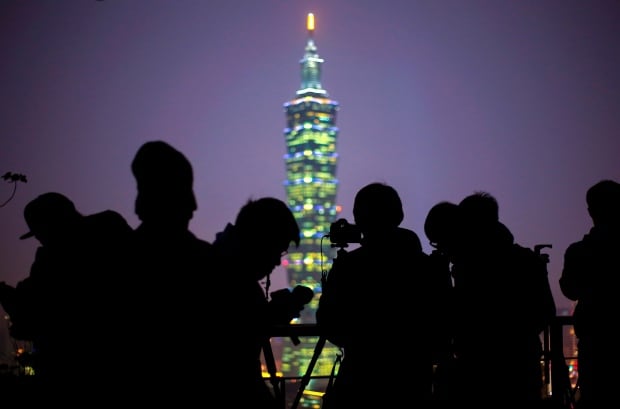 Photographers prepare to take photos of fireworks at the Taipei 101 skyscraper on New Year’s Eve in Taipei, Taiwan. (Ritchie B. Tongo/EPA) 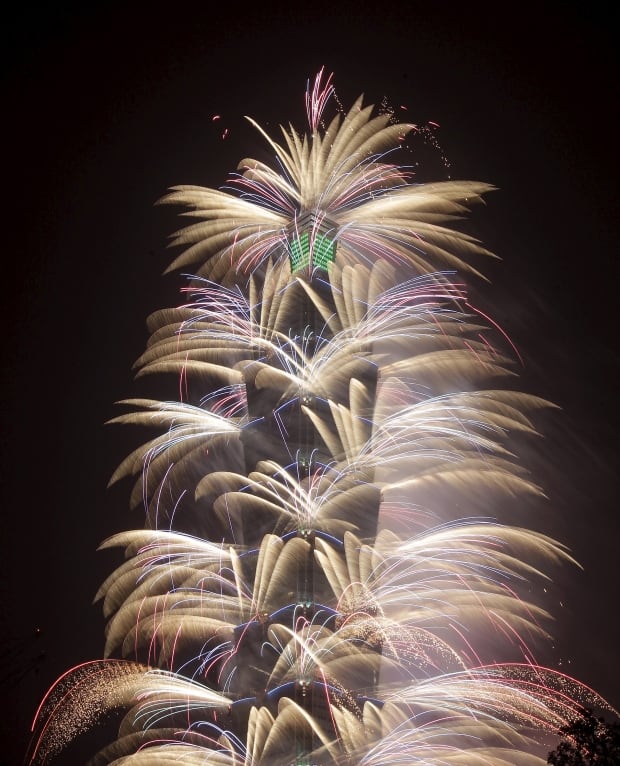 In Sao Paolo, Brazil, runners took to the streets in costumes for the annual New Year’s run. 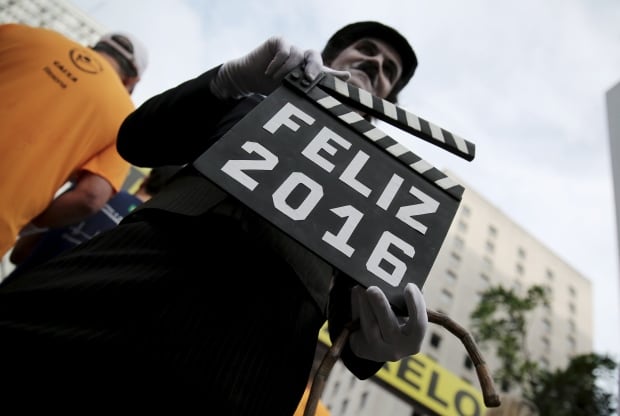 A runner dressed as Charlie Chaplin holds a clapperboard reading ‘Happy 2016’ before the annual Sao Silvestre Run, an international race through the streets of Sao Paulo, Brazil. (Nacho Doce/Reuters)

In Lucerne, Switzerland, people jumped into the chilly waters of the Reuss. 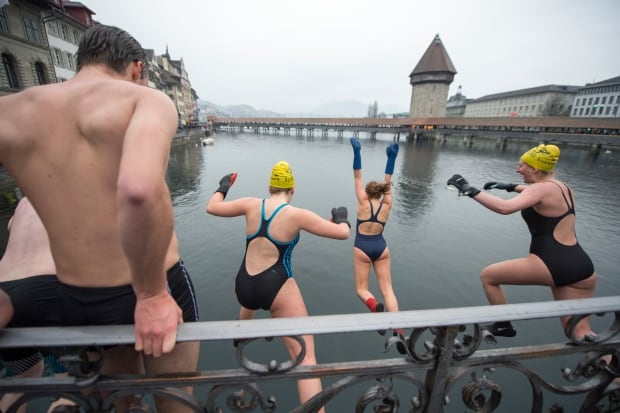 Around 40 lifeguards of the Swiss Lifesaving Society SLRG celebrate New Year’s Eve by jumping and swimming in the Reuss river with the Kappel bridge in the background in Lucerne, Switzerland. (Urs Flueeler/EPA) 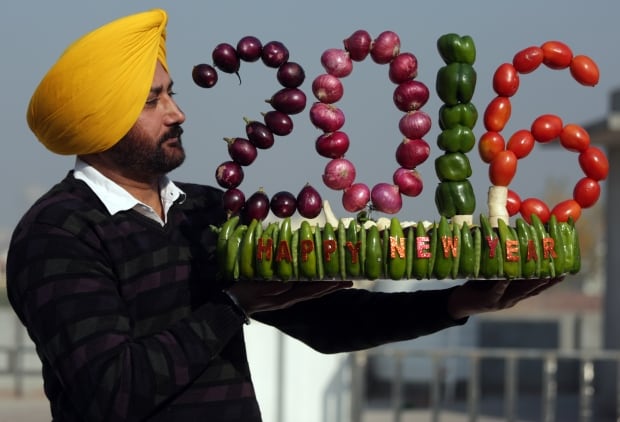 Indian artist Harwinder Singh Gill displays his new vegetable artwork made with vegetables on New Year’ Eve in Amritsar, Indiaon Dec. 31. Dental hygienist by profession, Gill has made the sculpture to wish everyone a prosperous new year. (Raminder Pal Singh/EPA) 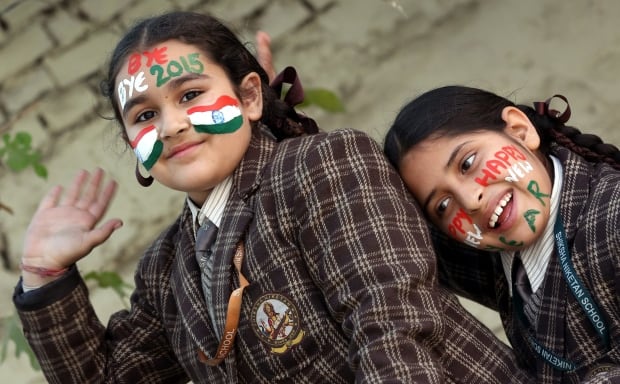 Indian school girls with their faces painted, say farewell to 2015 and welcome the new year in a school in Jammu, the winter capital of Kashmir, India. (Jaipal Singh/EPA) 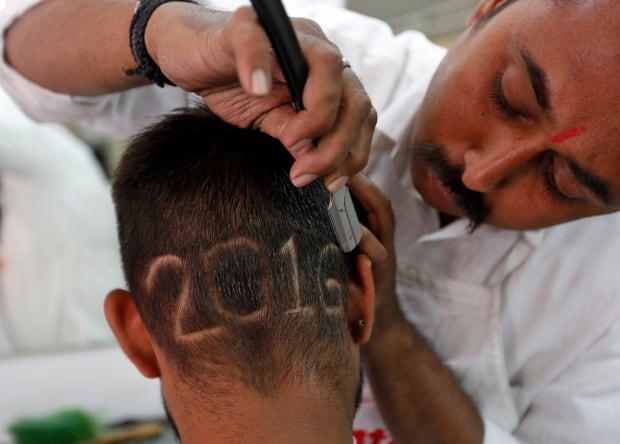 A man gets a haircut welcoming the New Year at a barbershop in Ahmedabad, India on Dec. 31. (Amit Dave/Reuters)

Meanwhile, in Brussels, the city cancelled its New Year’s celebrations due to fears of an attack. 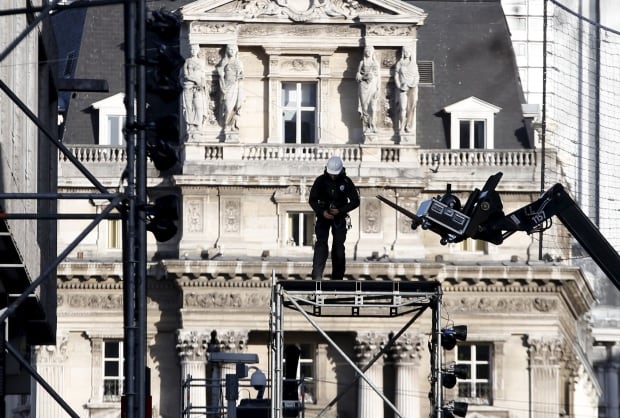 A worker dismantles equipment that would have been used to celebrate New Year’s Eve in central Brussels on Dec. 31. Authorities in the Belgian capital on Wednesday called off the city’s traditional fireworks display, citing fears of a militant attack. (Francois Lenoir/Reuters) 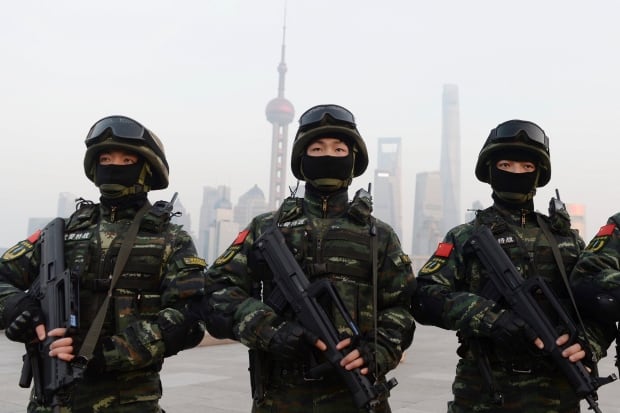 Chinese paramilitary police personnel stand on duty on the Bund, a popular tourist attraction in Shanghai, on Dec. 31. Authorities cancelled the annual countdown at the Bund as a precaution against a repeat of last year’s deadly stampede. (The Associated Press)

Jakarta was on high alert after alleged plans for attacks on Christmas and New Year’s were foiled. 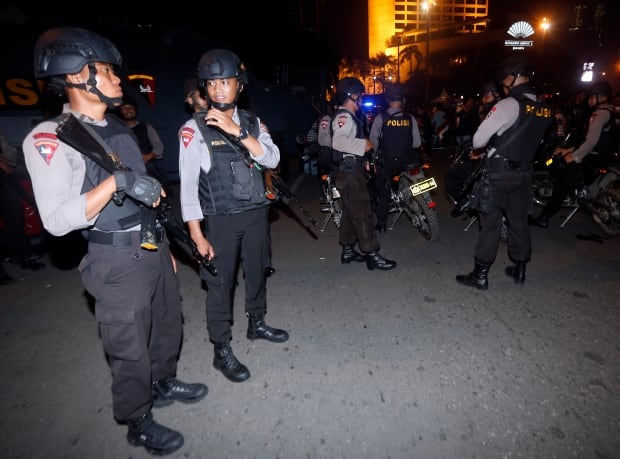 Still, celebrations have been mainly joyful — like these happy people in Seoul. How will you ring in 2016? 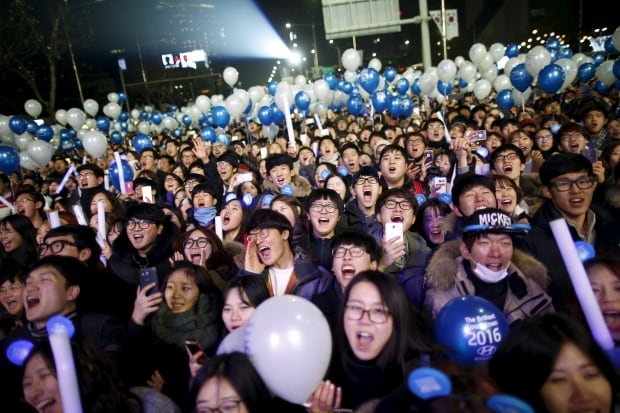