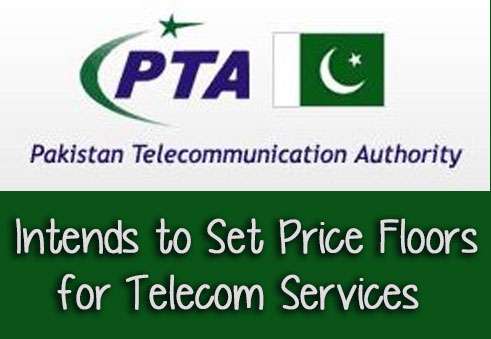 In order to combat price war among telcos and reduce volume of grey traffic calls, PTA intends to regulate the tariffs of Cellular Mobile Operators by introducing a price flooring mechanism.

The authority mentioned in its consultation paper that telecom operators have been requesting a course of action for price flooring of telecom services for many years now.

While PTA previously believed that telecom operators should drive the market on their own without any external input, it now has changed its view in line of aggressive promotional campaigns which have resulted in a race to the bottom and lower revenues for some operators.

Financial health of operators is poor, with three out of five operators posting losses in FY14 despite making positive profit margins. In fact, one operator recorded a decline in revenues during FY14.

This ongoing situation of negative growth in telecom revenues has pushed PTA to take measures to regulate tariffs in the sector.

In this regard, the telecom watchdog has sought a consultation of the industry stakeholders. Based on feedback of operators and customers alike, a price floor mechanism to regulate tariffs will be introduced.

The authority has set a deadline of one month for industry stakeholders to offer comments on the consultation papers floated recently in the telecom industry.

The authority asked CMOs to give their input on the floor price for various telecom services. CMOs will also provide details of per minute cost of voice calls and SMS for both on-net and off-net and for both post-paid and pre-paid connections.

Uptil now, market and competition have determined pricing for various services but PTA has made it clear that it reserves the right to review the appropriateness and adequacy of service charges of telecom operators on regular basis as per clause of 9.4.1 of new Telecom Policy 2015.

According to PTA, mobile phone companies introduced unlimited on-net calls for as low as Rs. 5 per day as compared to up to Rs. 1 charges for off-net calls. PTA said that this pricing mechanism is followed by every operator

As a result, all market players followed each other in introducing daily packages which carry a heavy cost for all companies and hurt the whole sector ultimately.
[text_block_nav title=”Mobile Networks”]

According to a report from the Telecommunication Management Group, a US based consulting firms, telecom operators create a significant increase between on-net minutes and off-net minutes either by lowering charges of on-net calls or increasing charges of off-et calls.

“What are your views on the offer of general/ country-wide promotions instead of city-specific promotion offered by CMOs?”

This difference in call prices creates a cluster of subscribers in the form of calling circles within the network of networks. As a result, operators with big subscribers base grow faster compared to lower subscribers base.

PTA mentioned in the paper that telecom authorities of different countries intervened in the market not only to reduce imbalance between on-net and off-net call charges but to safeguard the interest of industry as well.

It presented models of different countries including Turkey, Singapore, Colombia, Kenya and Slovenia.

The authority is also investigating the matter of fixedline operators alleging mobile phone operators involvement in cross-subsidizing of their on-net calls which cost them higher termination charges on landline calls as compared with calls terminated on the network of mobile phone networks.

In the absence of any consumer forum in Pakistan, ProPakistani will encourage its readers to give their feedback in the comment section, which will be later presented as their views to the authority.