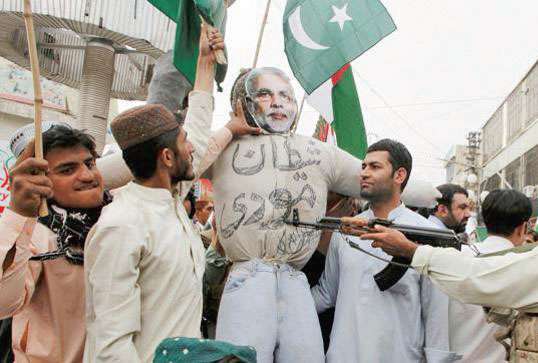 During his lengthy speech on August 15, Prime Minister Narendra Modi spoke briefly about what was happening in Pakistan, in Peshawar and the terror. He spoke about the messages he was receiving from the people of Balochistan, Gilgit and Pakistan-Occupied Kashmir (POK) who were thanking him, and in doing so, they were really thanking all Indians.

He did not say why they were thanking him. Nor did he say what he and his government would do for the Baloch, Gilgitis or the Kashmiris from POK. This, however, was enough for all of Pakistan to go up in arage. It was blasphemy, perhaps, to have mentioned these three regions while they have arrogated the right to themselves to spread terror and violence in India for decades. Reactions in India were on expected lines, largely ambivalent but at least the issue is temporarily centre stage.

The Baloch were jubilant and made no attempt to hide their feelings. Twitter went viral, as they say, and even lesser persons than the PM received hundreds of tweets a day from Baloch all over the world. One of them, while thanking Modi with all her dignity and pride, said the Baloch only needed that their voice be heard at international fora and capitals of the world. She hoped for this support from Indians. Other than that, they would fight their battles themselves.

There is, of course, a danger in this. Hopes aroused suddenly can lead to rapid disillusionment. There has to be a plan worked out after due process. At the end of World War 2, the British, anxious to keep the Soviet Union away from the Indian Ocean, even considered the possibility of detaching Balochistan from the rest of India. Two years later with the crumbling empire in mind, two British officers on loan to Maharaja Hari Singh of Kashmir, conspired to pass Gilgit to Pakistan in 1947, after the Maharaja acceded to India. Independent India missed out on the significance of these regions.

Nearly 70 years after independent Balochistan was taken over by Pakistan, the province has become a land hermitically sealed in a pressure cooker by the Pakistani Army. The Baloch have continued to revolt and die. In all the various battles fought by the Baloch, an estimated 50,000 have been killed. Pakistan has used religious and sectarian forces to subdue the Baloch but it has not worked.

The geopolitical situation has changed. British supremacy is now history and even the US is seen to be treading gingerly in West Asia, its massive Central Command (Centcom) notwithstanding. Dominance of the region could be passing on to China as Xi Jinping seeks to advance into West Asia and consolidate in Pakistan. The China-Pakistan Economic Corridor (CPEC) is the newest instrument, apart from the continuing nuclear and military aid to Pakistan. These are going to be interesting times.

The CPEC is of little interest to India because the alignment of most projects is north-south from Gwadar to Kashgar via Gilgit. There are no eastward trajectories since Pakistan does not want to trade with India, has not signed the South Asian Free Trade Area (Safta) pact, most favoured nation (MFN) treaty or Trade and Transit for Afghanistan.

For Pakistan, CPEC is a dream come true after the US and EU declined to bankroll what was hoped would be a Marshall Plan to resurrect the country’s economy. They were prepared to finance Pakistan for its dubious uses as an ally against terror. But no country was going to sink money to help a country that was also responsible for spreading terror or being perfidious. So enter China with its ‘Iron Brother’.

It may not be the flawless munificence that the Chinese may have sold them and Pakistan is yet to acknowledge who holds the iron. There is a difference between when an impoverished economy that hopes to be transformed into an economic hub and ending up being an economic colony.

The Baloch fear being pushed out by an influx of Chinese, Punjabi and Pushtun workers into Balochistan. This would change the social fabric in a country afflicted with several insurgencies. In Gwadar, CPEC is perceived as a scheme that will render their fishermen jobless. Besides, the Chinese would be protected by a 10,000-strong armed force of the army, half of which would be commandos and located mostly in Balochistan.

Pakistan has apparently not studied what has been the African and Latin American experience with seemingly benign Chinese investments. Closer home, Sri Lanka has been left with Chinese-built projects in and around Hambantota that are now white elephants and a financial drain. Indonesia was promised assistance of $24 billion in 2005. Ten years later, less than 10% was available.

The Chinese have already begun to seek tax exemptions in Pakistan that could mean a loss of revenue of about $2 billion. They have also expressed unhappiness at the manner in which decisions are being delayed.

Earlier this year, Pakistani Army chief General Raheel Sharif had declared that the army would pay any price to ensure that the CPEC is completed. One wonders if he has calculated its economic, social and political cost. Or maybe he was only calculating profits to the military.