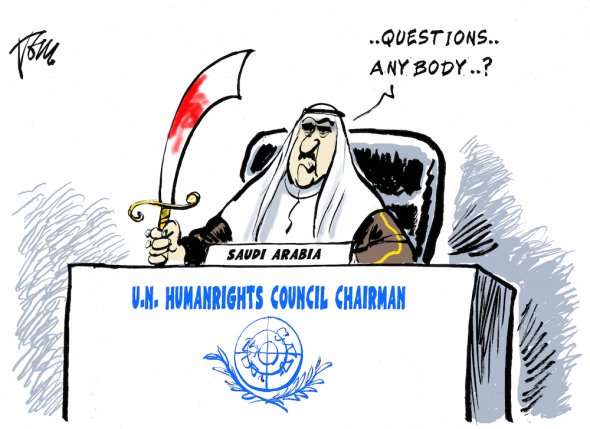 Saudi Arabia executed 47 prisoners convicted of terrorism charges on Saturday, including a Shiite cleric who was a central figure in 2011 Arab Spring-inspired protests in the kingdom.
The killing of Sheikh Nimr al-Nimr may spark new unrest among Saudi Arabia’s Shiite minority, largely concentrated in the kingdom’s east, and in Bahrain, which has seen low-level violence since 2011 protests by its Shiite majority demanding greater rights from its Sunni monarchy.The cleric’s name was on a list of the 47 carried by the state-run Saudi Press Agency. It cited the Interior Ministry for the information. Saudi state television also reported the executions.

Of those executed, Saudi Arabia said 45 were Saudi citizens, one was from Chad and another was from Egypt.

Saudi Arabia said a royal court order was issued to implement the sentences after all appeals had been exhausted. The executions were carried out Saturday in the capital, Riyadh, and 12 other cities and towns, it said.

Al-Nimr had been a vocal critic of Bahrain’s Sunni-led monarchy, which harshly suppressed the 2011 Shiite-led protests. Saudi Arabia sent troops to help Bahrain quash the uprising, fearing it would spread.

Amnesty International has called the verdict against the cleric, who was in his mid-50s, part of a campaign by Saudi authorities to “crush all dissent.”

Before his arrest in 2012, al-Nimr had said the people do not want rulers who kill and carry out injustices against protesters. He was asked at his trial if he disapproves of the Al Saud ruling family.

“If injustice stops against Shiites in the east, then (at that point) I can have a different opinion,” the cleric responded, according to his brother Mohammed, who attended court sessions and spoke to The Associated Press before the verdict.

Al-Nimr did not deny the political charges against him, but said he never carried weapons or called for violence.

In announcing the verdicts, Saudi state television showed mugshots of all those executed. Al-Nimr was No. 46, expressionless with a gray beard, his head covered with the red-and-white scarf traditionally worn by Saudi men.

After listing the names and images of those executed, Saudi state television showed black-and-white footage of previous terror attacks in the kingdom, one showing bodies in a mosque after an attack. Soft, traditional music played in the background.

Saudi Arabia carried out at least 157 executions in 2015, with beheadings reaching their highest level in the kingdom in two decades, according to several advocacy groups that monitor the death penalty worldwide.

Coinciding with the rise in executions is the number of people executed for non-lethal offenses that judges have wide discretion to rule on, particularly drug-related crimes.

All those who stand for human rights, justice and against oppression – It is your duty to stand in solidarity with the Non-Violent Resistance legacy of Sheikh Nimr and condemn the Saudi regime for this atrocity. Sheikh Nimr had become the beacon of a pro-democracy and pro-rights movement in the region and was even appreciated by the daughter of King Abdullah.

“Saudi princess called on people across the kingdom to rise against the ruling regime, as she greeted the martyrs and prisoners in Al Saud jails. The eldest daughter of King Abdullah, Sahar, who is along her three sisters under house arrest in Jeddah city, released a video message in which she said that victory is theirs. “Greetings to martyrs and to free men in jail. It is an honor for me to learn the meaning of freedom, rights and dignity from you revolutionary people,” the 42-year-old Saudi princess said. “We promise to follow in your footsteps and not to let go of your hands. God’s hand will be above us.

We learn determination from Ayatollah Nimr al-Nimr, the Sheikh of free men,” she said referring to Sheikh Nimr al-Nimr, who was attacked, injured and arrested by regime forces in Qatif region over calls for the release of political prisoners. “For this reason, we will press ahead on the path by our own will,” she added.” Source

Sheikh Nimr’s lasting legacy will be his principled and Non-Violent opposition to the Saudi regime and its questionable policies of suppression. His own words best describe his brave, principled and universalist stance for human rights:

“The death sentence against Sheikh Nimr Baqir al-Nimr is part of a campaign by the authorities in Saudi Arabia to crush all dissent, including those defending the rights of the Kingdom’s Shi’a Muslim community,” said Said Boumedouha, Deputy Director of Amnesty International’s Middle East and North Africa Programme.

Sheikh al-Nimr’s brother, Mohammad al-Nimr, was reportedly arrested after the sentence was passed at the Specialised Criminal Court in Riyadh.

The reasons for Mohammad al-Nimr’s arrest and his whereabouts remain unknown – although it is believed he was detained after tweeting about his brother’s death sentence.

“The shocking death sentence against Sheikh al-Nimr followed by the arrest of his brother in court today illustrate the lengths Saudi Arabia will go to in their quest to stop Shi’a activists from defending their rights. Sheikh al-Nimr must be released and Saudi Arabia must end its systematic discrimination and harassment of the Shi’a community,” said Said Boumedouha.”

“The execution of Sheikh Nimr Baqir al-Nimr is part of a campaign by the authorities in Saudi Arabia to crush all dissent, including those defending the rights of the Kingdom’s Shia Muslim community. Evidence for all the other charges he was convicted of came from religious sermons and interviews attributed to the cleric. Amnesty International’s review of these texts confirms that he was exercising his right to free expression and was not inciting violence. Some of the charges, such as disobeying the ruler, should not be offences as they criminalize the right to freedom of expression. Other charges are vague and have been used simply to punish him for his peaceful activities. Sheikh al-Nimr’s trial has been seriously flawed. Eyewitnesses, whose testimonies were the only evidence used against him, were not brought to court to testify. This violates the country’s own laws. The Sheikh was denied the most basic means to prepare for his defence and was not represented by legal counsel for some of the proceedings because the authorities did not inform his lawyer of some dates of the hearings”

“HRW condemn the execution of Sheikh Nimr al-Nimr who was convicted on a a host of vague charges, based largely on his peaceful criticism of Saudi officials. Local activists told Human Rights Watch that al-Nimr supported only peaceful protests and eschewed all violent opposition to the government. Human Rights Watch has urged the Saudi authorities to abolish the Specialized Criminal Court, the body that convicted al-Nimr. The government set up the court in 2008 to try terrorism cases but has increasingly used it to prosecute peaceful dissidents on apparently politically motivated charges and in proceedings that violate the fundamental right to a fair trial.” – Joe Stark, deputy Middle East director at Human Right Watch.”

You Will Not be Forgotten!