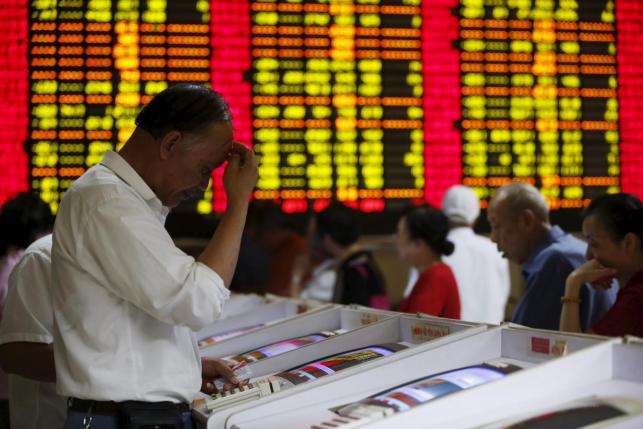 Asia extends sell-off with major indexes rooted in the red

Asia extends sell-off with major indexes rooted in the red

Markets in Asia remained mostly in the red on Monday, extending losses on the back of another Wall Street sell-off Friday.

The Shenzhen composite was up 1.13 percent after opening down 2 percent and the CSI300 index traded 0.2 percent higher.

With China set to release its fourth-quarter gross domestic product (GDP) numbers for 2015 on Tuesday, some analysts believe the sell-off in Chinese equities may worsen.

Vishnu Varathan from Mizuho Bank said in a morning note, that if China misses its full-year economic growth guidance of 7 percent, which is widely expected when it reports gross domestic product (GDP) data Tuesday, it will be “an excuse to sell.”

He added that with China equities down 9 percent last week and a “devastating” 18-22 percent for the year, there’s an “asymmetric” risk the GDP data Tuesday could spur “half empty tendencies” that could extend the China, and wider emerging market and commodity sell-off.

Apart from GDP, China will also be releasing a slew of economic data Tuesday, including industrial production, fixed asset investment and retail sales.

Tim Condon from ING said in a separate note that given the risk and uncertainties surrounding China, “any downside miss poses significant risk to financial markets.”

Before market open, the People’s Bank of China (PBOC) fixed its dollar-yuan mid-point at 6.5590, signaling a stronger yuan compared with Friday’s fix of 6.5637.

In Japan, the Nikkei 225 retraced some of its early losses to trade down 1.45 percent after falling as much as 2.39 percent earlier, hovering at a one-year low.

South Korea’s Kospi traded 0.18 percent lower after slipping as much as 1.19 percent at market open.

Down Under, the Australian market traded in the red, with the mainASX 200 index retracing some losses to trade down 0.71 percent. Earlier, the index traded off as much as 1.80 percent. Energy sector weighed heavily on the index, down 3.56 percent.

Oil futures retraced some losses during Asian trade. The West Texas Intermediate (WTI) was down 0.37 percent at $29.30 a barrel, after falling to a session low of $28.36 earlier. Last week, it declined 6.33 percent. Globally traded Brent futures traded down 0.83 percent at $28.70 a barrel, after reaching a session low of $27.67 in the morning. Last week, Brent futures shed 8.27 percent.

Other energy plays across the region also saw red, with Japan’s Inpexdown 1.70 percent and Japan Petroleum sliding 2.48 percent. South Korean oil plays such as S-Oil, SK Innovation and GS Holdings traded mixed, between down 0.42 and up 0.76 percent.

In China, Hong Kong-listed shares of CNOOC, PetroChina and Sinopecwere mixed, between down 3.68 and up 1.49 percent.

Concerns about increased output in an already oversupplied oil market was heightened after sanctions on Iran were lifted at the weekend.

Iran’s deputy oil minister said the country was ready to increase its crude oil exports by 500,000 barrels a day.

But Taimur Baig, chief economist for Asia at Deutsche Bank, told CNBC’s “Street Signs Asia” that another growing area of concern was the falling Baltic Dry Freight rates. The main Baltic Dry Index, which measures the cost of shipping dry bulk cargoes including iron ore, cement, coal among others, fell 10 points, or 2.61 percent, to a record low at 373 points last Friday.

“As far as dry goods are concerned, there’s this massive overcapacity and too much inventory around the world. And demand for that is falling,” said Baig. “We saw this happen in 2008 and although in terms of movement of oil, in container ships, those numbers are not that alarming. But the dry freight one is particularly worrisome.”

Among the country’s so-called four biggest banks, ANZ performed the weakest, down 1.89 percent. The rest of the banks also traded down.

Some gold stocks saw early gains with shares of Newcrest up 0.63 percent. But Alacer Gold slid 4.44 percent due to price target cuts for the miner from the likes of Morgan Stanley, Credit Suisse and Macquarie, according to reports.

The Australian dollar retraced losses to gain 0.23 percent by mid-morning against the U.S. dollar, fetching at $0.6913, after falling to its lowest since April 2009 in early morning trade.

Societe Generale (SocGen) said in a note Sunday that depreciation of commodity currencies mean, “production costs (a significant share is in local currencies) decline in dollar terms, further encouraging production [of commodities] and adding to the oversupply.”

The note added, “Weaker currencies spread concerns to other sectors indebted in dollars. These concerns then spill over to broader markets, further weighing on confidence in the real economy.”

The “concern is that the current configuration is leading to an investment drought that will trigger future shortages and price spikes,” SocGen said.

In Australia, index heavyweights Woolsworth and Wesfarmers were up 4.24 and 2.29 percent. Retail giant Woolsworth said it would exit the Masters Home Improvement and Home Timber & Hardware business by either shutting it down or selling it. It was considered unprofitable. Wesfarmers, on the other hand, announced last week it would expand its hardware business with the purchase of U.K.-based retailer Homebase.

Japanese stocks extended their sell-off with major export stocks slipping as the Japanese yen, considered a safe-haven currency, was in demand as risk aversion grew. The dollar-yen pair climbed above the 117-mark to trade at 117.26, after previously slipping to a session low of 116.55. A stronger yen is usually considered negative for Japan’s exporters as it trims earnings when translated back into the home currency.

Export-oriented stocks such as Toyota, Nissan and Sharp retraced early losses to trade down between 0.93 and 1.60 percent. Earlier, the stocks slid between 2 and 4.8 percent.