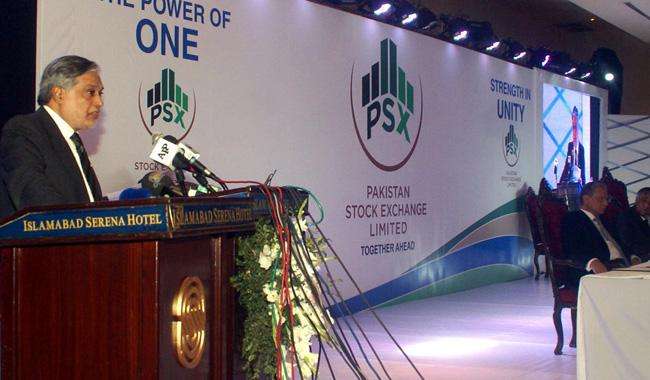 ISLAMABAD: Describing the occasion as a historic day for capital markets and economic progress of the country, Finance Minister Ishaq Dar inaugurated the Pakistan Stock Exchange (PSX) on Monday by hitting the gong three times.

With the establishment of the new integrated national bourse, the stock markets of Karachi, Lahore and Islamabad have been formally merged into the PSX, which began functioning on Monday. The formal titles of indexes such as KSE-30 and KSE-100 will be converted to PSX-30 index and PSX-100 in a few days by the IT departments concerned.

While the PSX will operate from the Karachi Stock Exchange under the new set-up, the Lahore Stock Exchange has been converted into LSE Financial Services Limited with the licence of a non-banking financial institution (NBFI) and the Islamabad Stock Exchange into the ISE REIT Management Company. Brokers of the ISE and LSE have been absorbed along with members of the KSE as certificate holders of the PSX.

The finance minister said the formation of a single national stock exchange would send a positive message abroad and attract more foreign investors in the country’s capital market.

He said the PML-N government had taken numerous reform initiatives to revive the country’s dwindling economy, which had now become stable.

“I assure you that in future too, the government will take bold initiatives for the economic development of the country, but I will ask political parties not to do politics over projects of national importance. All political parties should work jointly for resolving issues for the country’s betterment,” he said.

Addressing the inaugural ceremony, Securities and Exchange Commission of Pakistan (SECP) Chairman Zafar Hijazi said it was realised that without integration of the three stock exchanges, no strategic investor would come forward. The decision has been taken in consultation with the three bourses.

He acknowledged that in the past the stock exchanges had not been able to effectively play the role of frontline regulators.

“But with structural overhauling in place the PSX must act as an effective frontline regulator with complete segregation of its commercial and regulatory functions,” he said, adding that the task would be done by a strong and well-governed board of directors.

Mr Hijazi said the SECP would try to ensure that competent professionals of high integrity were appointed as directors and they were national-level representatives. He said that under the current hybrid structure of the exchange with brokers having 40 per cent ownership of it and proportionate representation on the board, the SECP was hopeful that this model would also be a success in the PSX.

“But if this structure does not work, the SECP will review it in its entirety to devise the best possible way forward for composition of the board,” he added.

Mr Hijazi said that because of “our improving economic indicators and compliance with global benchmarks, the MSCI Pakistan Index has been included in the 2016 Annual Market Classification Review for a potential reclassification to MSCI Emerging Markets”.

He expressed the hope that with the completion of successful integration of the exchanges and other complementary reforms in place, Pakistan would regain the status of “emerging market” at the MSCI platform.

However, the next challenge for the SECP will be to ensure fair representation of all three former stock exchanges in the elections of four board members of the PSX. The election process is to be completed in 45 days.

PSX Chairman Munir Kamal said that because of the rapidly improving economic situation of the country, local as well as foreign investors were taking keen interest in its capital market.

He said Pakistan’s corporate governance performance was close to the world standard and after the formation of a unified national stock exchange, it would further improve. But he said there were some flaws in the taxation system and the PSX would forward its proposals to the government to resolve the issues.