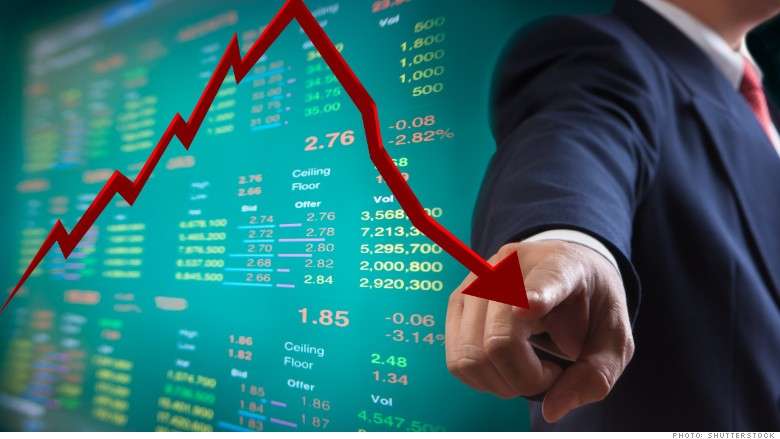 The Dow Jones Industrial Average plunged about 400 points in early trade Monday as a 7% drop in Chinese shares stoked a global selloff in stocks.

“It is not surprising to see such a selloff considering negative headlines from China and tensions between Iran and Saudi Arabia. What is surprising is that it is happening on the first day of the year,” said Ryan Larson, head of equity trading at RBC Global Asset Management.

“While trading desk are busier than they normally would be on Mondays, this is not a panic selling, it’s orderly. We are likely to see this kind of volatility a lot in 2016,” Larson said.

The S&P 500-tracking “SPY” ETF opened down nearly 2%. According to Bespoke Investment Group analysts, since the SPY SPY, -1.95% began trading in 1994, the ETF has opened lower on the first trading day of the year only twice in 22 years, and never by more than 1%.

China slump: The sharp losses followed an almost 7% slide in China’s Shanghai Composite Index SHCOMP, -6.86% on the back of a weak manufacturing reading. The slide activated a new circuit-breaker system for Chinese stocks, halting trading on the mainland for the rest of the day. European stocks also slumped.

“It is unclear if the rout in China is more of a function of overvalued markets there or deteriorating economy,” said Maris Ogg, president at Tower Bridge Advisors.

“We believe China’s economy is growing at a much more modest 2%-4% range, not 7% officials in China say. But that is not news to most investors. However, trading halts and market plunges did spook global investors,” Ogg said.

Last summer, a severe selloff in China’s stock market sparked a global market rout, which was seen as one of the reasons the U.S. Federal Reserve kept rates on hold at its September meeting.

Chinese officials announced plans for the circuit breaker system in December, as a measure to prevent the wild swings that accelerated this summer’s stock-market crash. But analysts and investors say the circuit breaker could trigger more selling, as the freeze spooks investors and losses snowball, setting off the halt all over again.

Saudi-Iran tensions: Investors also monitored developments in the Middle East, where a rift between Saudi Arabia and Iran raised concerns about further disruption to oil prices. Saudi Arabia over the weekend cut ties with Iran after attacks on its embassy in Tehran by people protesting the execution of prominent Shiite Muslim cleric Nemer al-Nemer.

Oil prices CLG6, -1.08% spiked on the tensions between Saudi Arabia and Iran, but have since pared gains somewhat. Gold prices GCG6, +1.39% were also higher, as the uncertainty spurred a flight to havens.

Data: In economic news, the Institute for Supply Management said its manufacturing index slipped to 48.2% last month from 48.6% in November. That’s the lowest reading since the last month of the Great Recession.

U.S. construction spending sank 0.4% in November to a seasonally adjusted annual rate of $1.12 trillion, the Commerce Department reported Monday. That was well below the 0.9% gain expected by economists surveyed by MarketWatch.

Amazon.com Inc. AMZN, -5.78% fell after Monness Crespi Hardt downgraded the stock to neutral from buy and suspended its price target.