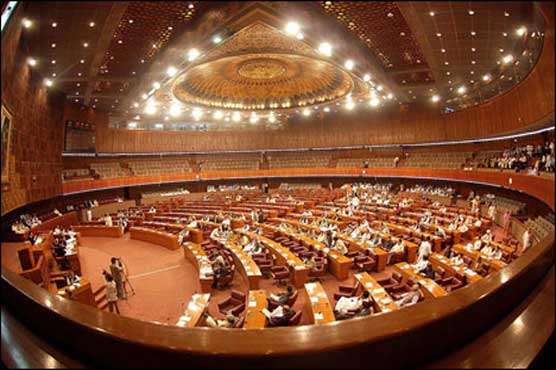 The National Assembly passed “The Income Tax (Amendment) Bill, 2016” on Wednesday requiring advance tax to be payable at the rate of 3 percent on registering or attesting to the transfer of real estate to be collected from the purchaser. The Lower House of the Parliament also passed “The Public Private Partnership Authority Bill, 2016” to promote domestic and foreign private investment in infrastructure and “The Pakistan Commissions of Inquiry Bill, 2016” to enhance scope of inquiry commission.

According to clause 4 of the Income Tax (Amendment) Bill, 2016, after section 236V, the following new section would be inserted, namely: “236W. Tax on purchase or transfer of immovable property.- (l) Every person responsible for registering or attesting transfer of any immovable property shall at the time of registering or attesting the transfer shall collect from the purchaser or transferee advance tax at the rate of three per cent (3%) of the amount computed under clause (c) of sub-section (4) of section 111.

(2) Tax collected under sub-section (5) shall not be adjustable:” (5) in the First Schedule,- (a) in Part I, the following shall be substituted, namely: For immovable property allotted to persons mentioned in sub-section (4) of section 236C. (1) rate of tax will be 0% for Immovable property is held irrespective of the holding period.

The members of Pakistan Peoples Party (PPP) strongly opposed the bills and staged a walkout from the House in protest. They accused the government of bulldozing the legislation. PPP lawmaker Shazia Marri claimed that there was a “lack of quorum” twice before walking out; however the House was found in order both times.

According to objectives of “The Public Private Partnership Authority Bill, 2016,” in order to achieve a high growth trajectory Pakistan needs quick investments in development of infrastructure to bridge the gap in this critical area. The government alone cannot provide finance due to its own limitations; therefore, promotion of private sector investment in this area is critical. The use of Public-Private Partnerships (PPPs) is likely to become widespread in Pakistan, with an expected surge in PPP financed projects in the near future.

The federal government has so far been modest utilising the PPP model in infrastructure investments, but the situation is likely to change in the near future as the present government embarks on an ambitious program of large-scale investment projects.

The Bill provides a regulatory framework to execute Public-Private Partnership in Pakistan so as to promote domestic and foreign private investment in infrastructure, set up transparent and efficient institutional arrangements for PPPs, and promote private sector participation in the economic development, among others through transparent and fair procurement process including (i) ensuring that projects are consistent with national and sectoral strategies (ii) ensuring value for money and budget affordability (iii) assessment of fiscal risks (iv) advise and facilitate the implementing agency to identify, develop, structure and procure the projects (v) prescribe and receive fee and charges (vi) ensure that Public Private Partnership Agreement is consistent with the provisions of this Bill and (vii) interact, collaborate and liaise with international agencies.

According to “The Pakistan Commissions of Inquiry Bill, 2016,” the existing law relating to the appointment of commissions of inquiry and empowering them for the purpose is the Pakistan Commission of Inquiry Act, 1956. The commission under the proposed law shall conduct the inquiry and perform its functions in accordance with the terms of reference given in the notification.

The government by notification can also confer additional powers to the commission having powers of the criminal court, power to constitute an international team and seek international co-operation from foreign countries or agencies to get information, documents, evidence and record or issue letters.