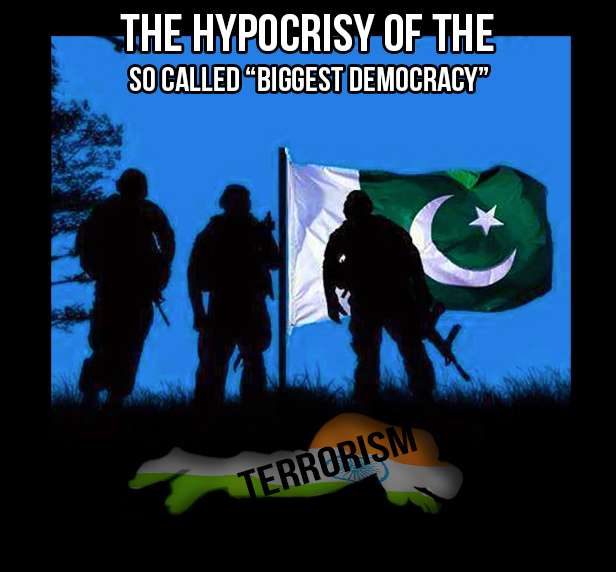 Hypocrisy Of The So Called “Biggest Democracy” – Ahmed Saeed

The hypocrisy of the so called “Biggest Democracy” of the world is uncanny. The entire region has suffered because of illegal occupation of Jammu Kashmir, obliterating any and all Geneva Conventions Protocols and direct violation of UNSC resolution. It seems as if the world’s so called guardian angels (UN, IMF, and NATO) have also been useless in this regard as they have been in most serious problems of the world like UKRAINE.

Shifting U.S allegiance from its oldest ally in the region (from Pakistan to India) like a usurper it is has also contributed towards India’s foolish desire to try to dominate Pakistan, Inviting Armageddon to the Sub-continent.

Recent False flag operation on its own Air base at Pathankot is an overwhelming evidence of India’s attempt to sabotage any peace talks with its superior counterpart. Consecutive attacks on Pakistani Embassies in Afghanistan and Indonesia were desperate attempts to shake the resilient nation of Pakistan. After the successful execution of Zarb-e-Azab, all sleeper cells along with Indian bred and trained terrorists have been eliminated but now as the proverb suggests Pakistani’s should be wary because is it not the dying serpent that bites the deepest.

As their Masters did, they desire to do the same. Promoting regional and global terrorism at the cost of the wellbeing of own residents has been the defining trait of India since the Partition. According to a National Family and Health Survey in 2005, total lifetime prevalence of domestic violence was 33.5% and 8.5% for sexual violence among women aged 15-49, India has been repeatedly reported to be the worst countries to live for women.

The country has one of the world’s largest populations living below the poverty line, and is home to three of the world’s most polluted cities. By the International Women Travel Centre India has been ranked the worst country to travel for women and is said to be “Dangerous and Obnoxious”.

Like in the past Pakistan has had a very sensible and forgiving stance with respect India’s unethical activities, dealing with and unfolding their hypocrisy and neutralizing the terrorist plots of its delusional neighbor.  Development of Tactical nuclear weapons was a big achievement for Pakistan to counter the otherwise conventionally bigger but ill trained force. The hypocrisy of the Modi’s Government along with the inherent opposition of creation of the state of Pakistan will be costly for both the Nations it’s the MAD theory “Mutually Assured destruction”.

The wave of terrorism that took Pakistan in its grasp for over a decade is now over, the Pakistani nation has collectively decided to eradicated all terrorism, sadly all of the terrorism was supported by Indian government or secret services. Such a quick and decisive victory in the country eradicating all of the assisters and strongholds of Indian supported terrorist is fact not easily swallowed by the aggressor.

Unlike the past at least there are no ambiguities  this time as to who the financier and promoter of terrorism was in Pakistan, and since they cannot get into the country anymore, attacking Pakistani embassy in other countries seems to be the strategy killing countless civilians. Just a coincidence everybody that falls lifeless to the ground these days in this region is Muslim, resulting from terrorism supported by India. Inside the country thousands of Muslims are discriminated against and killed every day, human life is disregarded for something as little as eating beef.

It’s a dangerous path India chooses to take; confrontation with Pakistan would not be to their advantage.  General Zia’s word to Rajiv Gandhi are still as valid today as they were in 1987 and is food for thought for the aggressor, before his departure, Gen. Zia turned to Rajiv Gandhi and said, ‘Mr. Rajiv, you want to attack Pakistan, go ahead and do it. But keep in mind that after this the World would forget Hulagu Khan & Gengis Khan & will only remember Zia-ul-Haq & Rajiv Gandhi. Because this will not be a Conventional War but a Nuclear War. In this situation, Pakistan might be completely destroyed, but Muslims will still be there in the World, but however with the destruction of India, Hinduism will vanish from the face of this earth’.